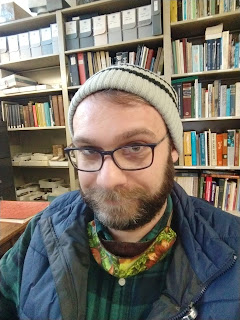 New Year, New Me? Not really, but I am going to resurrect this blog for the "?" time. I have been grappling with how I could do that. Also, I have a second blog that has become sort of redundant. The initial plan was to have this blog for my hobbies, primarily pokémon, and it has ranged from being more my opinion on things to general news. I got bored with that and started writing other types of posts that somewhat interested me... such as posts linking up "science in pokémon" to real world science. I enjoyed that a bit more. However, other things kept me from writing on schedule. I even started trying last year to write a fan-fiction just so I could get more practice writing fiction. It was ok (I think), but then once again I got busy and kind of left it just unfinished. I''ll probably get back to both of these things.
Then there's the other blog more focused on my natural history career. It became redundant in that I also write natural history blogs for my actual job. I was essentially writing two very similar blogs for two different outlets in addition to pokémon fluff pieces. It got to be a little much.

So how will things be changing? Well, I'm going to be writing whatever I want here. It could be paleontology, it could be pokémon, it could be anything. The common denominator will be me. Since I do write serious blogs for work, my guess this will be mostly fun posts with some serious science sprinkled in.

We'll see how it goes.

I'm also working on streaming on Twitch (as well as maybe Facebook and Youtube at some point) on Monday evenings. Currently the time frame is 8:30 - 10pm. Up to this point, I've been streaming primarily pokémon, but I'll probably add some other games to the rotation as I get more viewers.
Email Post
Labels: nature pokemon science