Deciding the outcome of any decision by having a pokémon battle is relatively commonplace, however that didn't mean I was particularly happy about it. Although I used to battle all of the time, as of late I hadn't given much thought to training. A lot of my pokémon help me in the field. They either help with excavations or help keep local pokémon in check should I happen to unearth a particularly inhospitable Geodude.

"Kangaskhan!" Lenora exclaimed, "Let's start this up with a Fake Out!"
Kangaskhan rushed my Tyrantrum, taking it by surprise, and landed a well placed punch on Grimlock's jaw. The Fake Out did little damage, but this attack was more for strategy. Grimlock's surprise opened up the opportunity for Lenora to follow up with an Aqua Tail. Kangaskhan spun around and struck Grimlock with the watery attack on the side, but he did not stumble. Although I was uncertain if Kangakhan was truly faster than Grimlock, given a Fake Out can be launched faster than one's normal speed, I needed to shift the momentum to my side to be safe.

"Let's show them how tough we really are Grimlock! Counter with Rock Slide!"

Grimlock smashed its large foot to the ground sending stones flying into the air. The stones became charged with draconic energy and changed direction flying directly at Kangaskhan. A few missed, however a few made contact and caused Kangaskhan to flinch with pain. I used this opportunity for Grimlock to use Dragon Dance. Although Aqua Tail isn't super effective, a few good hits would definitely bring Tyrantrum down if Kangaskhan was quicker. I needed to solidify an advantage and fast.

"Well, well looks like you kind of turned the tables on us," Lenora chuckled. "I suppose there's no way we could out run Grimlock now."

I really doubted that Lenora was simply giving up by saying that, but I had no idea what she had planned. If my career is coming down to this, I need to at least make a good showing and take advantage of our lead. 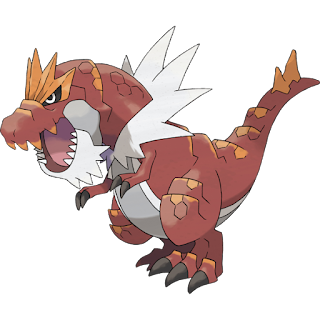 "Fire Fang!" I yelled, hoping to cripple Kangaskhan with a burn to solidify my speed advantage with a defensive one as well. If Kangaskhan couldn't hit as hard with Aqua Tail, then I'd certainly have this in the bag. Grimlock charged Kangaskhan with its newly heightened speed sending sand flying behind it. As he opened his giant maw a fiery second mouth appeared in front of it. Kangaskhan used her arms to attempt to shield her exposed front, however Grimlock quickly lowered his head to make contact with Kangaskhan's now exposed side, sparks of flame flying in all directions.

"Trying for a burn AND flinch, huh? A great play! Too bad it didn't work," Lenora smiled, "Show them your Hammer Arm!"

Grimlock was still within close striking range when Kangaskhan turned and brought her Hammer Arm down on the Tyrantrum's lowered head. She and Kangaskhan had almost baited Grimlock into attacking where they wanted him to. The super effective hit sent Grimlock to the ground as Kangaskhan stood above it panting. Grimlock quickly rolled back to its feet, sizing up his opponent and breathing heavily. Both pokémon were clearly close to being out of the match. However, Grimlock had the clear advantage of speed and attack.

"Time to finish this up!" I said. Although it'd had been ages since I had battled someone, I felt like I was back on my journey battling for a badge like I had done before.

"Finish her off with Earthquake!" I yelled as Grimlock lept into the air, preparing to attack with a ground shattering stomp.

"Sucker Punch!" Lenora responded and Kangaskhan burst upward with a quick jolt of unexpected speed catching Grimlock in the jaw midair. Grimlock crashed to the ground directly in front of me before immediately returning to his pokéball, defeated. 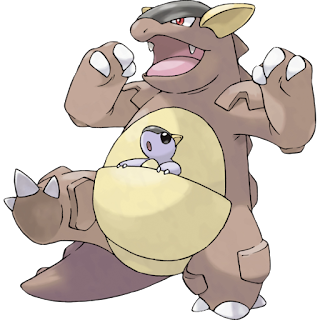 I was shocked. I thought I knew Kangaskhan's moves from seeing it battle on TV at the World Championship, but clearly Lenora had mixed things up. Still, I wasn't upset. I still felt that Grim and I had certainly made for a good show, and based on the numerous cheering faces I could see in the museum's windows, I was sure I was right.

"An excellent battle, Mattock," Lenora said as she walked over. "That Tyrantrum of yours is very strong, and you certainly used a lot of good strategy against me."

"I wasn't expecting you to have so many priority moves," I responded, "That Sucker Punch did its job in surprising Grimlock and I. Looks like I need to take a quick trip to the pokémon center."

"Nonsense!" Hawes said, "You're our guest! I can heal your Tyrantrum in the old gym healing machine we still have. The Pokémon League hasn't come and picked it up to relocate it to another gym yet. You didn't think that Gym Leaders have to leave the gym to heal after every match do you?"

Hawes made a motion toward Grim's pokéball and I handed it to him. He seemed all too eager to run off with it. I'm sure I made a face as Lenora laughed and assured me he'd give it back. We headed back inside to Lenora's office and I was, once again, nervous. I certainly hoped that my performance as a trainer would help convince her I was right for the position, even if I was still unsure of why it even mattered. Lenora took a seat at her desk and I returned to my seat across from her.

"You know," Lenora said, "there seems to be a lot of people that are interested in the fossil curator position. She said with a sly smile. "I must have gotten at least fifty, maybe sixty, inquiries about the position."

"Oh?" I said, getting more the more nervous. Fifty other applicants minimum? How did I stack against all of these other people?

"Yes, and I only interviewed you."

"Only me?" I blurted out in bewilderment.

"Yes, only you. I know your reputation as a researcher and a professor. Your research into pokémon paleontology is great. To be honest though, several other applicants also are very impressive in the exact same way."

Lenora was obviously beating around the bush, and my nerves wouldn't really allow me to continue to just sit there with all this mystery.

"So, if my research abilities weren't outstanding why did you only interview me?"

Lenora opened a drawer and sat an Old Amber fossil on her desk. "I know you opinions on fossil rejuvenation and I saw how you tried to fake interest when Hawes brought it up. You do know that if I were to offer you this position, overseeing our fossil rejuvenation efforts would be something you would oversee, and you know that includes when trainers bring in fossils for the service?"

I nodded in agreement, although, again, I assume my expression may have gave away something I wasn't wanting it to.

"So you would do so begrudgingly it seems," Lenora responded. "Why, of all people given you train fossil pokémon yourself, would you be so opposed to reviving fossils when most would have no problem with it?"

I leaned back in my seat. Now I knew why she wanted to interview me compared to all of the other applicants. She simply wanted to ask me this question in person, after battling me and my fossil pokémon.

"I don't trust trainers to have the best interest of ancient pokémon in mind when they revive these fossils," I said bluntly, which visibly surprised her. "Sure, I have several fossil pokémon of my own. However, several were given to me by trainers who simply did not know how to properly take care of them," I said. "They can't eat generic pokémon food since it was never a part of their diet in the past. You can't simply release a fossil pokémon, or shouldn't, if you find you can't train it or it doesn't fit on your team."

I stared deeply into the Old Amber sitting on Lenora's desk for a minute or two, then I continued.

"Trainers shouldn't be so nonchalant about releasing pokémon in general, but to release a pokémon that has no natural habitat to return to? That is just cruel. It's cruel to the pokémon that was released as well as the pokémon it will inevitably come into conflict with as it attempts to take their home for its own. Trainers need to understand the responsibility they are taking on when they revive an extinct pokémon."