Showing posts from December, 2017
Show all

My Return Trip to Alola: Ultra Sun and Ultra Moon 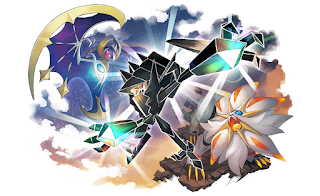 Alola everyone! I'm back from my second trip to Alola in my copy of Ultra Moon. Since it has been almost a month since the release, I don't feel bad about talking about some of the finer points of the game. However, if you haven't played the games yet because you are expecting them for Christmas or something, then be warned. This blog post will be filled with spoilers! Now that is out of the way, if you continue reading, that's on you.  Necrozma is kind of the main antagonist, which is new to Pokémon games. That role is usually given to the evil teams. Pokémon Ultra Sun and Ultra Moon (USUM) was marketed as the biggest pokémon game to date, with approximately twice the story seen in Sun and Moon as well as other revamped games like Emerald or Platinum. Like those games, USUM were meant to be upgraded versions that explore the third legendary revealed in their given generation. In this case, the legendary was Necrozma. USUM also pulls heavily from Black 2 and Whit
Post a Comment
Read more
More posts