Showing posts from February, 2017
Show all

The "Real" Pokémon Format: Is There One? 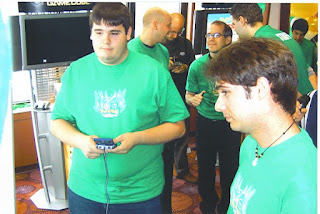 The first official tournament I played in, but I had played in many unofficial ones at League before. Over the years I have discussed my tournament experiences with many people. I've played in some really weird formats. Back in 2005 I participated in the  Ultimate Frontier Brain Battle . The format was weird. You could use whatever you wanted except mythicals and you couldn't have hold items. The tournament was played via Pokémon Colosseum and the only people in attendance were either Nintendo staff or friends/family of the competitors. This was my first experience with someone suggesting there was a "real" format. Several of the players said that we should all agree to not use pokémon like Mewtwo, Groudon, Kyogre, or Rayquaza. I understood the sentiment, but I wasn't about to sacrifice my chances to someone who decided to not agree to these informal restrictions. In the end, no one followed that so I'm glad I made the right choice. Fast forward and I l
Post a Comment
Read more
More posts