The first Premier Challenge for Sun and Moon I've run in South Carolina was held this past weekend at Starlite Gaming in Summerville, SC. We had 10 participants, all of which were Masters. Four rounds of Swiss were played with us cutting to Top 4. During the event I raffled away goodies, including small pokemon notebooks, car decals, and a Master Ball lanyard.

Starting last year, I had begun releasing a lot of the play data from my Premier Challenges (PCs), however I stopped once attendance took a nosedive after the World Championships. This year I plan to keep it more consistent, so long as attendance continues to be moderate to good. The graph on the right shows the most commonly registered pokemon by percent. The most commonly registered pokemon was Alolan Marowak. There were many pokemon that were only registered to one team. Although they are present in the raw data, I did not include them in this graph. Below are the teams that made top cut. 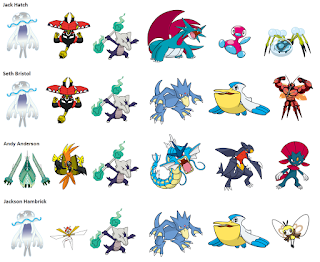 I am also tracking additional usage data for the remainder of every PC I host from now until the end of the 2017 season. For example, half of all of the teams entered included an Alolan Marowak on their team. For the Top 5 most commonly used pokemon, which I refer to as the MVPs, I have included the percentages of chosen abilities, natures, items, and attacks. I may eventually go on to include data for every pokemon that appeared on more than one registered team, however we'll see. To access the raw data, check out the Google spreadsheet I will be routinely updating.
Email Post
Labels: 7th generation alola pokemon tournament