With Athens Regionals coming up at the end of May, many of our writers have been busy preparing teams and practicing on Battle Spot. However, there may be a few people out there who are on the fence about participating in Regional events in the coming weeks and may even be worrying about the amount of time they have to prep a team. Well, if you think that there isn't enough time to "grind" to raise a team, we at Team KO are going to let you know of some easy ways to get a team ready without resorting to cheating (which is bad mmKay!). Truthfully, with the introduction of Omega Ruby and Alpha Sapphire you can have a team ready to go in less than a week, if that.

Step 1: First off, breeding the team you want. This is likely the MOST time consuming part of the whole ordeal. Some people would suggest you go and find someone to give you a 6 IV, or Perfect, Ditto. IVs are the numbers that govern a pokémons stats. Higher IVs = Higher starting stats. IVs have a numberical range from 0 to 31. A 0 is the worst, 31 is the best.

Well, you could do trade for that Ditto if you want, however there's a strong chance it will be hacked. If that bothers you, there is another way. Simply go on to Wonder Trade and begin trading! Often, people who breed for tournaments Wonder Trade their extras away. Spend an evening (I think #WonderTradeWednesday would be the best, check Twitter for updates) and Wonder Trade like mad. You'll likely get several pokémon from various egg groups that have 4, 5, or even 6 perfect IVs. Not only that, if they are from different regions, like Japan, they actually increase your chance of breeding a shiny. Want to breed a Politoed for a rain team? You don't necessarily need someone to Wonder Trade you a Poliwag to start the process. If the male is from the Water I egg group which contains Blastoise, Lapras, and pretty much every non-Fish water type then you have a start. Getting the female Poliwag with the Hidden Ability Swift Swim may be a little harder, but if you spend a minute or two on a trade forum, you can get one pretty easy. You might even be able to find the other pokémon you want for your team as well, and maybe can skip breeding altogether. (Team Knockout is a good place to start!) Another tip: The Destiny Knot item will transfer up to 5 stats (IVs) from the parents and the Everstone will transfer the  nature of the pokémon holding it. Once you get parents with the right stats and natures you are in business to breed to get one for yourself that combines these attributes into exactly what you need for your team!

Step 2: Next up will be EV Training. For every 4 EVs you earn you get 1 stat point (you can track these somewhat on the Super Training screen).This one part people really like to complain about. referring to it as the grind. However, in ORAS, it's SUPER SIMPLE! First off, you will need to infect the pokémon you are raising with Pokérus. If you do the Wonder Trade step, you'll likely end up with one or two guys with 'Rus. Just battle a few things with the 'Rus pokémon at the lead and the guys you want to raise behind it. Eventually, it will spread. When done, put the 'Rus guy back into your computer. Eventually, PokéRus will fade, but not if the pokémon is stored in the computer.

Giving Pokérus will double the EVs earned after a battle, but we can multiply it further. At the Battle Maison you can use Battle Points to earn Power Items (Power Lens, Power Band, etc) that add 4 EVS for a given stat. So let's say you are going for Sp. Attack with the Power Lens and fight a pokémon worth 1 Sp. Attack point. Power Lens will make it worth 5 EVs (1 for the pokémon + 4 for the Power item), and then PokéRus will double that to 10. The maximum a stat can have is 252, so that means to max it out a stat you will have to fight 26 pokemon that give out IVs in the stat you want. The good news is we can cut that down too.

Instead of just fighting a random pokémon by running in the grass, you can trigger a battle using Sweet Scent. Sweet Scent can be used outside of battle to attract pokémon hordes. Simply have an Oddish, Bulbasaur, or other grass pokémon that knows it on your team and select it like you would an HM move. If you are in grass or in a cave it will attract the horde, which contains 5 pokémon. Given that each pokémon will be worth 10 EVs with the right Power Item and PokéRus that makes each battle worth 50 EV points! That means after 5 battles with the item you will be at 250 EVs! One match in Super Training or fighting a single pokémon will give you the remaining 2, meaning you maxed a stat in 5 battles! To help you track down some hordes, here are some of the best hordes for EV training in ORAS. Each is worth 1 point in their given stat normally, so if you have PokéRus and the right Power item, each horde battle you finish will be worth 50 EV points. This is a solid number that is easy to use in calculations. If you need less than 50 EVs, each individual pokémon in the horde is worth 10... so just KO the ones you need then run. For example, if you wanted 20 EVs, just KO two then run. 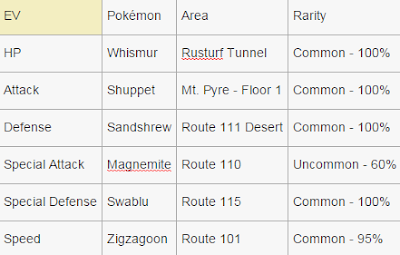 Step 3: Finally, we having leveling up. If you are battling VGC style, the level is really more about getting to a certain level to have all the moves you need. Flat and Normal rules set the level to 50, so in reality if you get to 50 you're golden. However, if you have one of those guys who learns moves higher than level 50, or you want to use 100s, then we have a trick for that as well. ORAS brought us Super Secret Bases, which are the easiest way to level up. You can go to your base and use your computer to scan QR codes to activate bases around Hoenn. Several people have set up bases where you can fight Blisseys at level 100 that can't fight back (they have non-damaging moves or moves that knock themselves out like Healing Wish), This means you can bring in the guy you need to level up, switch to someone to knockout the Blissey, and then reap the rewards. Blissey has the highest Exp. payout of any pokémon, so of course having a lv. 1 fight one and KO it means TONS of experience. Also, Lucky Egg is held by Pelipper now, so if you use the PokéRadar app in the PokeNav (Bottom screen) to fight Pelipper enough, it will eventually tell you when a Pelipper is holding a Lucky Egg. Swipe the egg and turn on the Exp O-Power and you'll be raking in the experience.

There are plenty of sites online you can Google to fill your game with Blissey Bases. To get you started, here are three codes that will place Blissey Bases in the Secret Meadow area. If you haven't found this area yet, you will have to use a combination of Surf and Dive to get to it. This Youtube video will show you exactly how to get there. To download the Bases, you need to go to your own Super Secret Base and choose to scan a QR code. If you have scanned a lot of QR codes recently, or have a lot of Super Secret Bases set at favorites you may have to delete some before you can scan. For a larger image, simply click to enlarge. We have more bases for download on the Team Knockout Facebook page, so feel free to like our page and scan our bases!

If you have any questions or comments, feel free to post them on our Facebook! We hope this helps you raise pokémon more quickly and efficiently!
Email Post
Labels: bases breeding ev iv vgc