Getting the Most Out of Serperior

Serperior is the final evolution of Snivy, which was the grass starter from Gen V. When the Unova starters were first shown, there was a little debate as to what Snivy was supposed to be. However, when its evolutions were finally released, there was little question. An obvious play on the fact that snakes branched off from lizards, evolutionarily speaking, we see the lost of Snivy and Servine's legs as it evolves into the serpentine Serperior.

Unfortunately, Serperior didn't seem too superior when it's stats were examined. It has good speed and bulk, but little else. That being said, none of the Unova starters really "shined" when they first came out. Well, it's Gen VI now, so let's see if we can get the most out of the superior snake.

First off, going back to stats, Serperior is asking to be raised bulky (Base: 75HP/95Def/95SpDef). Oddly enough, it's a rarity in that it is also a very fast bulky pokémon (Base: 113 Speed). I have attempted to make a relatively speedy Support Serperior before, and it works out ok when using strategies like Dual Screens (running Light Screen and Reflect). The problem now is that there are so many pokémon that are either faster with Taunt or that have priority Taunt thanks to Prankster. Its Grass typing doesn't do much to help it's walling abilities either. It's weak to Fire, Poison, Flying and Bug which are all pretty common (with the exception of Bug potentially). Grass doesn't really have much in the way of resistance either. Sure it can tank Earthquake like no one's business, however, I doubt that would even attempt an EQ on it anyway.

Serperior also suffers from one poor ability, Overgrow, and a shallow movepool. Which leaves it pretty easy to predict. It does have one really amazing ability, however we will get to that later. Getting back to Serperior's movepool, it seems to lack any focus. It has some gems in terms of support, physcial attacks, and special attacks.. but most tend to be Grass type moves and therefore reduce it's coverage.

Lucky for Serperior earlier this month the Hidden Ability Contrary became available in Japan. With some luck, you may be able to come across one in Wonder Trade, the GTS, or chatting with people (or get one from future Team KO tournaments). The most obvious exploit of this ability is Leaf Storm. With Leaf Storm, Contrary Serperior will gain +2 to Special Attack rather than lose power (usually -2 to Sp. Atk). This has the potential to make Serperior, at the very least, a moderately viable option for battle. If you are using Serperior, I don't think you should use anything but Contrary! 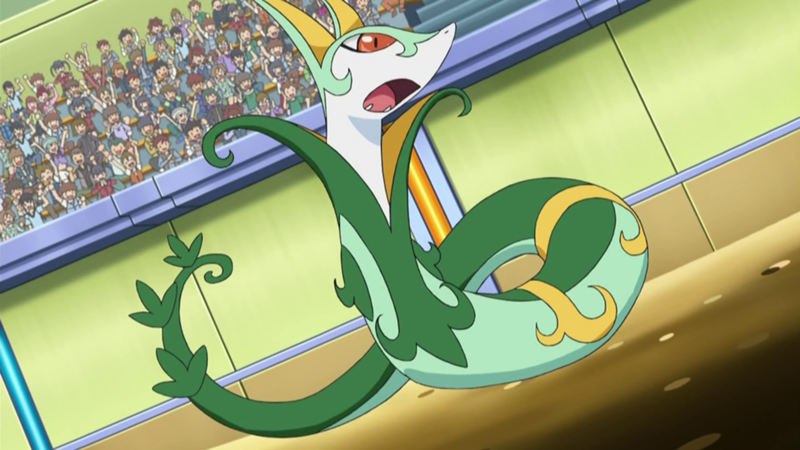 The Superior Cannon
Nature: Timid
Item: Choice Scarf
Attacks: Leaf Storm, Outrage, Hidden Power (Ground or Rock), Um... Eh.. really let's face it, you're just going to spam Leaf Storm.
Strategy: Spam Leaf Storm. Seriously. The other moves are really just there if you get forced out by Roar or something and comeback in with no more Leaf Storms. An EV spread of 88HP/252SpAtk/168Speed will ensure that you outrun anything with a speed less than 501. Well, that means you'll outrun every non-Speed Boosted Mega as well as any non-Scarfed pokémon (except Speed Deoxys). Leaf Storm is not very effective against Fire, Poison, Flying, Bug, Grass, Dragon, and Steel. Seeing as Serperior is weak to those first 4 types, I wouldn't leave it out to fight those anyway. I wouldn't bother fighting Grass or Steel either. Dragon, on the otherhand, is easily handled by Outrage if you are lucky enough to be fighting Salamence (or it's Mega). Why is that lucky? Well, Serperior is faster, and Contrary means that its attack will get boosted from Intimidate rather than cut! This means even with Serperior having no EVs in Attack, it would still OHKO a Salamence, and unless that Mega Salamence has 168 EVs in Defense or more, it's a OHKO. In fact, even if the Mega Salamence is Impish with max Defense Serperior still has a 12% chance to one shot it, and is sure to 2HKO it. If Mega Salamence is Impish with max Defense though, it DEFINITELY won't be OHKOing Serperior. Not too shabby. This works best in Rotation or Singles. You definitely don't want multiple pokémon ganging up on Serperior with this set.

Storm the Wall
Nature: Calm
Item: Assault Vest or Leftovers
Attacks: Leaf Storm, Dragon Pulse, Hidden Power (Rock or Ground), Giga Drain
Strategy: Again, Leaf Storm is the crux of the set. It deals considerable damage while simultaneously boosting Sp. Attack. Assault Vest adds a little more bulk vs special Fire attacks from non-Fire opponents (again, Mega Salamence comes to mind). EVs for this set are simple. Max out HP and Speed (252) and put the remaining 4 in Sp. Attack. For added variance, Leftovers can be swapped for Assault Vest. If you do this, you can swap out Hidden Power for Protect or Substitute. If you are playing in Doubles or Triples, that is pretty much a given. However, Taunt will still be an issue. Most people Taunt Serperior right off the bat given it's past use as a Dual Screens pokémon. If you want to run Dual Screens, you can use the same EV spread given here. Regardless there are a lot of pokémon that give Serperior trouble and other teammates will have to account for them, namely Talonflame, Mega Kangaskhan, Aegislash, and Mega Charizard Y.

Can you think of any other ways to put Serperior to use?
Email Post
Labels: 6th generation featured oras pokemon unova XY