The Battle of Legends is set to begin soon. Tournament registration is runs until July 24th, with the tournament running this upcoming weekend from July 25th - 27th. A rather unique tournament, this allows almost any pokémon to be used with the exception of Diancie. What is also interesting, is that you can use two "uber" or "event" pokémon. These pokémon include: Mewtwo, Mew, Lugia, Ho-Oh, Celebi, Kyogre, Groudon, Rayquaza, Jirachi, Deoxys, Dialga, Palkia, Giratina, Phione, Manaphy, Darkrai, Shaymin, Arceus, Victini, Reshiram, Zekrom, Kyurem, Keldeo, Meloetta, Genesect, Xerneas, Yveltal, Zygarde. Normally, these pokémon do not see tournament level play. I can count on one hand the number of times that "uber" legendary pokémon were allowed to participate. As of X and Y, this is the second tournament to allow "ubers", however the last one only allowed Xerneas, Yveltal, Zygarde, and Mewtwo. In addition, this tournament follows double battle rules, and pokémon are raised to level 100 during the matches. 10 matches can be played in per day, meaning that 30 battles can be done per game during the tournament. Since the rule only restricts "ubers", trainers can also use pokémon migrated up with move tutor moves as well as Megas, etc. However, since "uber" legendary pokémon are usable, I plan on focusing on the five "uber" legendaries that I think will be all over this tournament. 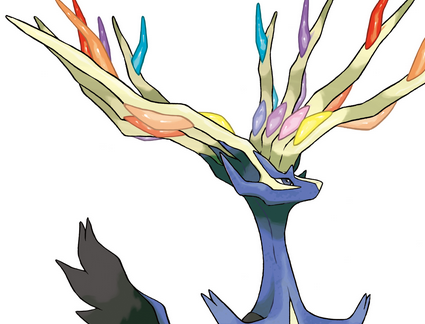 5: Xerneas - As of the last tournament, Xerneas was on almost every team. The biggest selling point for Xerneas is Geomancy. I commonly saw trainers exploit a Geomancy + Power Herb combo. This allowed them to sharply boost their speed and special stats, turning Xerneas into a hard hitting behemoth. The beauty of this, is that means Xerneas can fit relatively well on any team since it can support itself quite well. Xerneas' weak point is its Defense, but even that isn't much of a weak point. To take Xerneas down, a strong physical poison or steel move is the way to go. If you are running Xerneas, a good second "uber" to consider would be Mewtwo, specifically, Mega Mewtwo Y. Mewtwo can hit poison types with super effective psychic moves and it can learn Aura Sphere or Fire Blast for steel types. Kyogre is also a good partner since it resists steel moves and is a special attack juggernaut. Xerneas can learn Thunder through TM, so rain support could be very beneficial. 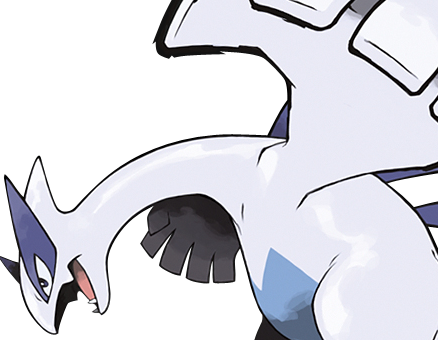 4: Lugia - When I say Lugia will be common, I'm specifically thinking about Multiscale Lugia. Multiscale Lugia (which can be captured from the Dream Radar) will take less damage if its HP is full. With access to Roost and Recover, it can be relatively easy to keep Lugia at full HP. I would personally lean toward Roost. With Roost, Lugia will lose its flying type for one turn, meaning it will also loose those weaknesses for one turn. Just like Xerneas, Lugia can benefit quite well from Kyogre. Lugia has access to several high power water moves, as well as Thunder. The main reason I think Lugia is a little better over Xerneas is that you don't have to take the one turn to use Geomancy. Its bulk is already substantial, and its faster than an unboosted Xerneas. In fact, Lugia has access to Steel Wing so it could land a serious hit on Xerneas the turn it tries to use Geomancy. Lugia does have a downside though. This format is going to be saturated with Psychic types and ways to counter them. Basically, every high power Sp. Attacker has access to Shadow Ball or Thunder, which does impair it a bit. Multiscale helps, but even that can only go so far. 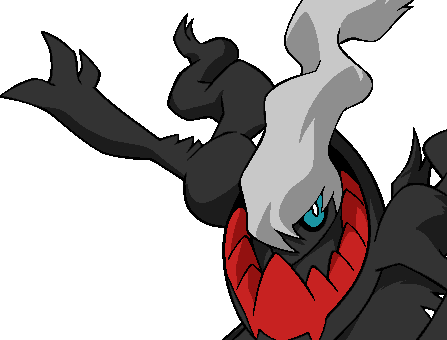 3: Darkrai - Unlike some of the legendaries allowed in this tournament, Darkrai is MADE for double battles. Dark Void is one of the biggest banes on anyone's existence in the double battle format. In other tournaments, the only way you would come in contact with Dark Void is from Smeargle. Now that there is a tournament that Darkrai is allowed in, however, it's a bigger problem. Darkrai has way better stats that Smeargle, primarily speed. In fact, Mega Mewtwo (X and Y), Deoxys (Normal, Speed, and Atk Forme), Shaymin (Sky Forme), Arceus (using Extreme Speed) and Meloetta (Pirouette forme) are the only legendaries that can outrun it without boosts. Most of the time, Darkrai will have more of a problem with the new Megas like Mega Gengar or Mega Manectric. Like Xerneas, Darkrai pairs well with most of the legendaries. The best pairing, though, would be with a sweeper legendary capable of hitting two opponents. Since Darkrai will primarily be putting pokémon to sleep, it's better to have the other one attacking. The main issue with Darkrai is it's frailty. Being weak to fairy and fighting hurts, as those are both common types with many legendaries learning moves like Aura Sphere. The best alternative may be to combo Darkrai with one of the legendaries that are faster than it, mentioned above. The other option, although not a legendary one, is to pair with Mega Gengar. That way Mega Gengar could lock the opponent in play with Shadow Tag and Darkrai could put them to sleep. 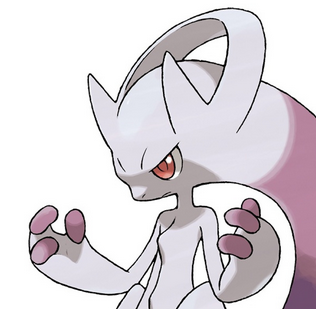 2: Mewtwo - As I mentioned in previous entries, Mewtwo is ridiculously good. Absurdly good could be even used to describe it. Mewtwo is a powerhouse on its own and has access to a wide variety of moves. In fact, it can hit most of the other legendary pokémon for super effective damage depending on which four moves the trainer has chosen to go with. Not only that, it has access to TWO Mega evolutions. That puts Mewtwo pretty high on this list. It fits well with pretty much any other legendary and team strategy. I'd personally chose Mega Mewtwo Y, however. Mega Mewtwo Y outruns almost every other uber legendary outside of Deoxys. It also has Insomnia, so after Mega evolving it can get free switch ins on Dark Void. I almost expect to see Mega Mewtwo Y on every team.

1: Kyogre - Kyogre just does beat out Mega Mewtwo Y as being the pokémon I expect to see the most of. Mega Mewtwo Y does certain things better, for instance it's faster, but Kyogre has a higher stat total, better defenses, and an ability that can help an entire team rather than just itself. There's a reason why Rain Teams do so well, there are just so many good ways to exploit the rain. In fact, even Mega Mewtwo Y can use it with Thunder. All in all, Kyogre is the best uber legendary pokémon do to its versatility more than anything. Also, many people run Kyogre with a scarf which outruns Mega Mewtwo Y, which is probably Kyogre's biggest threat. Most of the other legendaries would have to do some sort of boosting to survive more than one or two hits from Kyogre. Good thing this tournament isn't taking place in Alpha Sapphire. With Kyogre being this good already, I really doubt there would be a team that wouldn't have it's Primal version. I'd go ahead and suggest that if your pokémon can learn Thunder or Hurricane and has good special attack, to go ahead and teach to them. More than likely, you'll face a lot of rain... so you might as well get some use out of it yourself if you for some reason don't run Kyogre. I would strongly advise using it, but that's just me.

Which uber legendaries do you think will be the most common? Which two do you think make the best combo to build a team around? 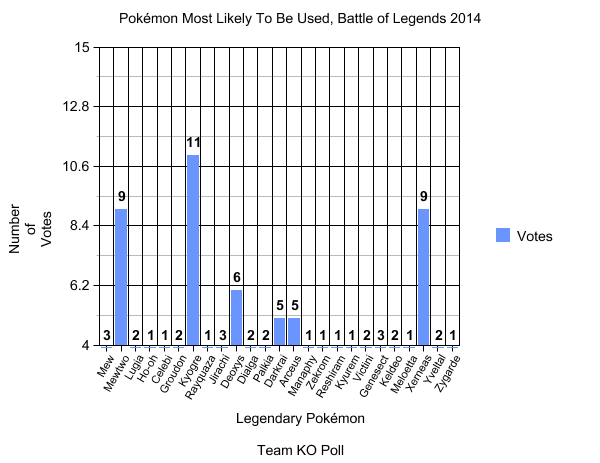 Along with this article, I had my readers vote on which legendary pokémon they thought would be the most common.

Based on the data, most of the people who voted agreed that Kyogre was going to be EVERYWHERE (and it was). The only projection we were off on was Lugia. This is most likely due to the rarity of Multiscale Lugia. Only one can be sent to Black 2 or White 2 by using the Dream Radar (multiple would require you to have multiple copies of B2W2). Additonally, just because you got one doesn't mean it would be particularly good. The fans, however, also predicted that Deoxys would see a good bit of play. It was possible, however, in my opinion Deoxys is more fit for singles. The defense form could likely do ok in Doubles, but the others not so much. Otherwise, the predictions of the fans and myself were pretty spot on.

Xerneas was a little more commonly used than we gave it credit for, but that's not that big of a difference. The image on the right shows the top 12 pokémon used in the tournament, which also includes some of the non-legendary pokémon that were often used.