Recently, Play! Pokémon and Nintendo have been pretty creative for rulesets for online tournaments. Earlier this month, the Pokémon Global Link site hosted one of these tournaments, the Think Fast Challenge. In this challenge, participants only had 10 minutes to have single format battle, 30 seconds to chose the Pokémon with which to battle with, and 15 seconds to select moves. This challenge returns next month as a double battle tournament. I participated in it and enjoyed it, although I didn't do particularly good or bad. I ended up with a rating somewhere around 1500, which is what you start with. This past weekend was an International Challenge, which runs every month (roughly) and follows VGC format: double battle, Kalos native/dex Pokémon only.

Next week, registration for the next online tournament, the Eevee Friendly will begin (July 3rd, 2014 - July 10th). The tournament will run from July 11th - July 14th. The Eevee Friendly, as you might have guessed, is only open to Eevee and its evolutions. The Pokémon also have to have been caught or bred in Kalos, so Black and White Tutor moves are not available. The battle format is Rotation, which doesn't see a whole lot of use. The most interesting aspect of this tournament, in my opinion, is there are only 9 usable Pokémon. Not only that, Eevee and it's evolutions aren't known for having wide movesets so finding ways to utilize the limited resources to the best of one's abilities will be very interesting to see. Unfortunately, the entry prize isn't as good as some of the past tournaments. Anyone who plays gets 1000 PokéMiles, but I don't know many people hurting for PokéMiles. Regardless, this looks like it could be a fun tournament to play in.  Since the tournament was announced, I have been planning a team to use, as I've never made a Eevee team. I'm almost done with it, so I'll likely raise each of Eevee's evolutions so I have a couple alternates if I feel the team isn't performing the way I would like.

Like I mentioned before, I'm also planning to raise alternates.. namely the only three other Pokémon allowed in the tournament.

So do you plan on entering the Eevee Friendly Competition? Do you want to make suggestions for my team? Please leave your comment below! Keep in mind, this is for the 2014 Eevee Friendly rules, so make sure your suggestions fall within the guidelines for the tournament. For example, yes, I know teaching one of my physical sweepers Iron Tail would really help against Sylveon.. but that is not a legal move for this format (not Kalos native). Any derogatory posts will be deleted.

UPDATE 6/24: I have changed Espeon from knowing "Psychic" to knowing "Psyshock" as per Patrice's suggestion. Additional reasoning can be found in the Espeon section of this post. 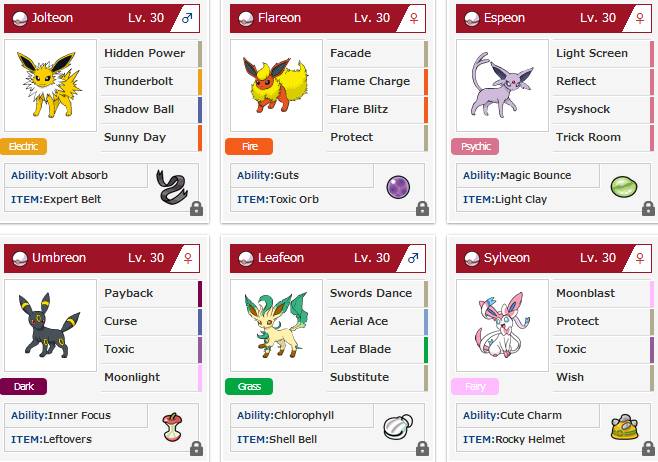 UPDATE Post Tournament: This is the team I finally went with. I made some slight tweeks to Espeon, but that's about it. In retrospect, I should have run Return over Aerial Ace on Leafeon. I went 12/8 in the tournament (60% win percentage). Not particularly good or bad really. It put me at a score of 1554 so I finished 1921 out of 10,000. I have some videos showing some of my rounds, as well as some random Rating Matches that I will post later. I am particularly happy with one Rating Match I had VS a guy that had Thundurus, Latios, and Mega Blaziken on his team. The Eeveelutions really showed that in the right hands they can be decently good.