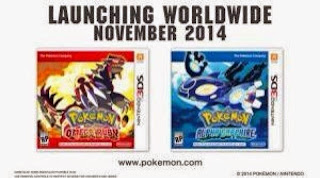 With the announcement of Omega Ruby and Alpha Sapphire yesterday, the internet has been bursting with excitement. Since it has been a day, I suppose it's time to start fanning the flame with conjecture!

1) Mega Groudon and Mega Kyogre: While we didn't get much with announcement, we got box art. That being said, the box art says a lot. What it is saying is that Groudon and Kyogre are changing. Many think they be Megas. With that being one of the major selling points of X and Y, it would make sense. To awaken Groudon and Kyogre, you will need the Red and Blue Orbs. Who knows, they could be Mega Stones!

2) Groudon and Kyogre get new Formes: This is the other option. Maybe this new appearance isn't due to Mega evolution, maybe they have new formes like "Omega Groudon" and "Alpha Kyogre". They have been confirmed to be different, and the phrasing could indicate either.

3) Mega Latias and Latios Download: We already know these exist, however the Mega Stone is unobtainable. Well, so is Blazikenite, but it was given as an event. In the past we got the Eon Ticket event to get the Soul Dew... Maybe now it'll get us "Latisite". There is one question though, will the Mega Stone take the place of the Soul Dew or will both be obtainable?

4) Streetpass Secret Bases: This seems logical. Right now Streetpass isn't that utilized. All we get right now are Pokémiles, and although they have a point, being able to find bases of people we've passed would be WAY better.

5) More Megas/More Pokémon: Typically, remakes only get new formes. This is mainly due to the fact the older games had to have the Pokémon preprogrammed in and have already prepared pixel art to exist in the game. However, X and Y is the first set of Pokémon games to be compatible with downloadable patches. That means that new Pokémon/formes/and Megas could be added mid-generation by simply creating a patch for older games. That would explain the low number of new Pokémon from this generation, the lowest yet.

6) New areas/Islands: All remakes have included new areas. However, with the previous points taken into account, we could get an area that is almost like a new "micro region" with new Pokémon to catch, mega stones to find, etc.

What do you want to see in the game?
Email Post
Labels: 6th generation legendary mega oras pokemon