If you've been under a rock since yesterday you may have missed that Nintendo presented us with some new information yesterday during their Nintendo Direct stream. The Fairy-type has been confirmed to exist and be Super-effective against Dragon! Take that "meta-game"! More information has surfaced about Pokémon X and Y including the release date: October 12th. If you missed the stream, you can watch it below.

If you watched the stream you may have noticed two new pokémon. The Bug/Flying butterfly Vivillon and the Flying/Dragon type bat-esque pokémon Noivern. Artwork for these pokémon can be seen below. Noivern gets a new Normal move called Boomburst. I assume, based on it's speaker like ears, that Boomburst is a sound based move. Maybe Exploud can get it too? 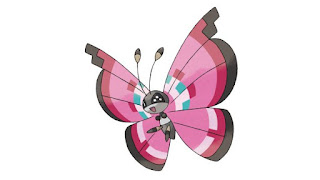 These were not the only pokémon released, however. At a later conference Nintendo announced 3 more pokémon! The Fire/Flying type Talonflame (it obviously evolves from Fletchling), the Water type shrimp Clauncher, and the Water/Poison seaweed like pokémon Skrelp. It would seem the inspiration for Talonflame is a falcon, clauncher is a shrimp or other crustacean, and Skrelp is based on seaweed or one of the many seahorses species that hide in kelp by mimicking it's appearance.

In addition to new pokémon new gameplay aspects were also announced. Trainers can now compete in Sky Battles which are only for Flying and Levitating pokémon; Horde Battles which are similar to the wild double battles for Black and White, but now are small packs of 5 pokémon. This seems to take some inspiration from the anime as we have been seeing packs and gangs of pokémon for quite some time (Squirtle Squad anyone?).

A method for better getting along with your pokémon called Pokémon-amie (mon amie means "friend" in french.. specifically female friend but whatever). Basically, it's Nintendogs but with Pokémon. You can pet and interact with your pokémon to make it like you better. Apparently, this will also make it so your pokémon may perform better in battle as well... increasing critical hit chances and such. I'm sure the smogonites are going to hate this! :) Seems I need to become a pokémon-amie with my Super Luck Absol!

Earlier today, CoroCoro scans also leaked to give us MORE pokémon. There is a new Fire type lion cub pokémon, a tiny fairy pokémon, and Vivillon's unevolved forms. We also are shown several new characters including the new Bug type Gym Leader (the blonde girl with the camera). The three kids in the last scan are friends who apparently start their journey when you do. 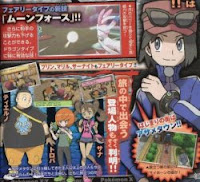 So, whatare your opinions of these developments? As always, we love to hear from everyone! We also have a Facebook Page if you want to go there and discuss this with other Team KO members!