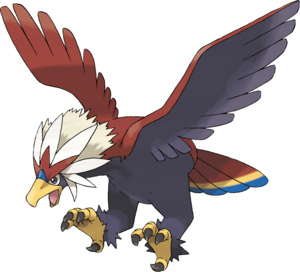 Braviary is the symbol of American Pokémon. His eagle form, red, white, and blue coloration, and fancy headdress profess everything American. Many Native Americans deified eagles and also saw them as prophets or good omens.  The eagle is a majestic symbol of power and grace.  Braviary has the power, but lacks the grace. Braviary’ attack is base 123 which is great and maxes out at 379! But he lacks the speed of a true sweeper at base 80 (maxes out at 284).  It seems Braviary is a classic physical sweeper, but has a few neat options for special moves like Hyper Beam, Air Slash, and Heat Wave (in Black2/White2).

Unfortunately its Normal/Flying typing is far from unique and Staraptor outclasses Braviary in speed.  In comparison Staraptor probably has a better move pool and abilities as well.  Braviary has fair bulk (100 base HP, 75 base defenses), but with Flying’s weaknesses Braviary’s lack of speed is a killer.  Braviary’s abilities are lackluster and Sheer Force is probably the best option.  There are a lot of sets out there for Justified guys, but this ability won't be available until B2W2 are releases.

Here are some move-sets that work well with Braviary:

Tonto Pronto (Physical Sweeper):
Nature: Adamant or Jolly
Hold Item:Focus Sash, Shell Bell, Leftovers, Lum Berry, White herb, Yache Berry, Life Orb.
EV Spread: 252 Attack, 252 Speed, 6 HP/Def
Lum Berry will be excellent for healing confusion after Thrash. White herb will allow the use of one Superpower without stat loss.  Focus Sash will assure in 1v1 a Tailwind.  In 2v2 Tailwind will also benefit your partner. This set does help for first hit moves like Ice Shard, which in reality Braviary can’t do much against.  But you could use the Yache Berry to weaken that first shard.

This set will take a lot of work, and is very situational. Seems like every bird gets Heat Wave these days (well.. at least if you look at HeartGold /SoulSilver and B2W2) and for 2v2 this is great. Brave Bird is standard for max damage.  You can choose between Work Up or Tailwind and that will affect your EV spread (Max out attacks for tailwind or speed for Work Up). Again Yache Berry is great here for those Ice Shards, but Sash will ensure a hit for stat boosting in 1v1 and Shell Bell can somewhat counteract recoil from your Braveness.

This set provides a lot of coverage for weakness in general. Again, White herb is great for keeping your stats up.  Rock Slide has the chance to flinch, but unless you boost speed that is going to be tough. Shell bell for Brave Bird again.

The Spirit of Courage (Wall set):

This set is designed to be somewhat defensive, but I will be the first to admit this won’t be easy or ideal.   But hey, what if you get an Impish shiny right?  Bulk Up is almost a must here and if used once allows you to place EVs outside of Attack.  Leftovers are always an option. Scope Lens will help shadow claw and should be considered. Facade us there to take advantage of those pesky toxic/burn guys.
Email Post
Labels: 5th generation featured pokemon unova