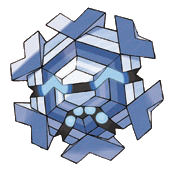 Single Ice Types are hard to come by, and none is harder to come by than the new Black and White Pokémon Cryogonal. Cryogonal are very mysterious and for the sake of December, it will be our featured Pokémon for this month!

Due to the season change feature in Black and White, Cryogonal can be very hard to find in any season other than Winter (roughly 1%). If you have your game set to the current date (December), your game will be in Winter so this gives you an easier chance to go out and catch them. Cryogonal can only be caught in Twist Mountain. I ran into a lot of Cubchoo’s in my pursuit of a Cryogonal. The one I caught wasn’t a good nature for its type (Brave) but thanks to one I received in a GTS trade and the help of one of the other admins - we’ve been breeding some with real potential.

Cryogonal is a genderless Pokémon, so Ditto is the only partner of choice. We’ve got a good batch of Timid natured Cryogonal with either 2 or 3 stats maxed in Speed, Special Defense, or Special Attack. A good Special Defense stat is great for Cryogonal since it will be able to handle most Special Attacks like Flamethrower. On the other hand, its regular Defense is probably Cryogonal weakest point- making it especially vulnerable to physical Fire, Rock, and Fighting type moves.

Cryogonal’s only Ability is Levitate, which comes in handy when facing battles with field damage such as Spikes and Toxic Spikes. Use Cryogonal’s Rapid Spin attack to help rid the field for your other party Pokémon, but beware Stealth Rock! Cryogonal takes big hits from this when switching into battle. Cryogonal’s good Speed can also help its Rapid Spin attack as well as to beat out potential Taunt’s (if your running status). It also can help in the case of Weather teams. Cryogonal is one to consider for Hail teams because it’s Blizzard attack can pack a punch!

The Moveset I’m planning for my Cryogonal is:

Spinning Snowflake
-Ice Beam/Blizzard (Blizzard has less PP, still on the fence on this one)
-Rapid Spin
-Recover
-Flash Cannon

I like to have a bit of variety on my Pokémon. I have an Empoleon from my Diamond game with a similar Moveset, and I’d like to try it out with a Unova Pokémon. There are other choices for moves that can be used such as adding Light Screen or Reflect, even Toxic or Haze.

I am also planning on EV-ing my Cryogonal with most points going towards its biggest stats - Speed, Special Defense, and Special Attack. As far as a held item, I’m leaning towards Cryogonal’s Wild hold item - Nevermeltice.

Another thing I’d like to point out - since some of the Admin’s and myself shared a laugh over this - Cyrogonal’s Shiny form has yellow eyes and tears - so remember everyone, don’t eat yellow snow!