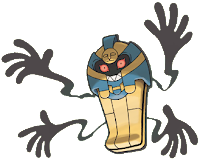 With Halloween coming, I really love the opportunity to start off reviewing the 5th generation with the Coffin Pokémon, Cofagrigus. For those of you out there who are unsure about how to pronounce it's name, it's pronounced Cough-Uh-Gree-Gus... just a quick FYI.

When some of the first 5th gen screenshots were released Cofagrigus was one of the first pokémon leaked.. and even though it was just shown from the back I knew this guy would hold a spot on my Unova team for sure.. and it does. Along with my obvious love for this pokémon's appearance, it actually can be quite useful!

Cofagrigus (and it's unevolved form Yamask) bring something very unique to the battling front, the ability Mummy. This ability will activate if someone makes a physical attack, and then replace the attackers ability with Mummy. Basically, it's like a disease which will spread to each physical attacker causing them to lose thier normal abililty. This can be really useful for opponents whose strategy rely heavily on thier pokémon's abilities. For example, Scizor normally has the ability Technician which powers up weaker moves like Bullet Punch or U-Turn. If it makes physical contact with Cofagrigus it loses Technician and gains Mummy.. meaning it will lose that attack bonus. This makes Cofagrigus a pretty fun switch in pokémon if you expect a physical attack. Coupled with this, Cofagrigus has really good defense stats so you can handle a decent amount of punishment (Base stats: HP 58/ATK 50/DEF 145/Sp ATK 95/ Sp DEF 105/ SPD 30).

Unfortunately, Cofagrigus suffers from something a lot of the 5th gen pokémon suffer from... a shallow movepool. Most of the moves it gets are Status or Physical moves, but most of the status moves it gets don't fit it and it's better with special moves than physical moves. That being said, it gets enough to make it usable... it's just a tad predictable and so far as I've seen its best use is in Single or Rotation battles. It's not so good if multiple pokémon in Double and Triple battles team up on it... and Mummy can get a tad out of control. Once Mummy goes rampant in a multi-battles you could see some of your physical pokémon start to lose their once useful abilities to Mummy. Everything I suggest here is for Single or Rotation.

A simple set based on boosting Cofagrigus' Sp. Atk and Sp. Def stats while at the same time weakening the opponent due to status. A good staple moveset for the Coffin in that it already does well surviving most physical moves so by using Sp. Def natures like Sassy or Calm with Calm Mind it should survive a lot of special moves too. Will O' Wisp or Toxic will whittle down your opponents HP while Cofagrigus boosts with Calm Mind, and then attacks with Hex. Additionally, Hex will double in power if your opponent is affected by a status move. Whether you chose Will O' Wisp or Toxic is up to you, however there are pluses and minuses to each. The burn from Will O' Wisp will drop their Attack meaning Cofagrigous will survive more physical moves, but is less accurate than Toxic. Toxic gets stronger over time, and is more accurate, but more pokémon types are completely immune to it. Again, the choice falls to preference. As for the final move slot, again it's a choice depending on how it fits your team. I simply suggest Psychic or Energy Ball due to how strong they are.

A simple, and rather narrow moveset, this Cofagrigus is simply for setting up Trick Room for the rest of your team. The best way to use this set is as a switch into a physical move after some field damage has been placed by another pokémon (Stealth Rock, Spikes, etc) because this moveset is meant to force your opponent to switch a lot. If you do, not only will the opponent take field damage, but they will also lose their ability to Mummy AND also lose some HP to Rocky Helmet. After taking all of these effects they will probably switch again and you will have a free turn to set up Trick Room. If they don't switch and they continue to use physical moves, they'll slowly being knocking off HP. You can then tack on Will O' Wisp/Toxic for more HP loss. Finally, you have Memento or Destiny Bond depending on preference. Memento is if you want to switch yourself, but don't want the new pokémon to take massive damage from an attack. You lose Cofagrigus, but the next pokémon won't be hit hard as Memento will cut the opponents Attack and Sp. Attack. Destiny Bond is if you want to attempt to take a pokémon out if you expect Cofagrigus is about to be KO'd. Memento is better if you want to make sure the next pokémon has a couple Trick Room turns after Cofagrigus is gone because people usually will stop trying to actively KO you if you use Destiny Bond too early... which may eat up all of your Trick Room turns so be careful!

A Curse? Or a Blessing? Although not really a moveset, it should be mentioned that Cofagrigus' ability does create a nice little combo with pokémon that have bad abilities in Single battles (like Slaking's Truant and Archeops' Defeatist). It doesn't matter so much what the Cofagrigus' knows, but I'd suggest using a moveset similar to the "This Creature is the Bringer of Death" moveset. The only difference is you attach the item Eject Button instead of Leftovers. If you switch in the Eject Button Cofagrigus into a physical move, the opponent will get Mummy but then Cofagrigus will immeditately switch out. You can then send up Slaking or Archeops and use a physical move now giving your Slaking or Archeops the Mummy ability as well! This means that now Slaking can attack every turn and Archeops no longer gets an Attack drop if it's HP drops below half.

If you have any ideas or opinions, feel free to comment!
Email Post
Labels: 5th generation featured halloween pokemon