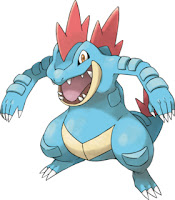 It’s a big gator…what’s not to like? Nice Attack stat, nice coverage in its physical attacks, potential sweeping with Dragon Dance (also has access to Agility and Swords Dance, but DD is better than both). STAB Water attacks, physical Ice attacks, Earthquake, Rock Slide, a couple Dragon moves…wait…I’ve seen a similar set before. That’s it…Gyarados. But this isn’t about Gyarados…this is about the Water-type starter for Generation II.

That being said, Gyarados outclasses Feraligatr…but that’s for another time. Feraligatr runs with 105 Attack and 78 Speed, which Dragon Dance makes into a formidable force. Special attacks aren’t even considered on a Feraligatr, and with its coverage, they’re not needed. And with Generation V and the Dream World introduced, Feraligatr has a second ability: Sheer Force. SF doesn’t work on every Pokemon that has it…and Feraligatr is not one of those. Sheer Force works with Waterfall, Ice Punch/Fang, Rock Slide and Crunch, along with some moves that should not be on a Feraligatr…ever. The Sheer Force boost makes Feraligatr a little better, and a little more intimidating. The only downside is negating the secondary effects, which can be useful in some cases. Addtionally, the Feraligatr is currently not available in the Dream World anyway. Now…the movesets and strategies.

Nice bulk, and decent coverage. DD is less of an Attack boost than SD, but it increases Speed, which helps Feraligatr more. Waterfall is more accurate but weaker than Aqua Tail, and has a chance to flinch…take your pick. Earthquake and Superpower are both options for coverage, and neither is affected by Sheer Force. So it comes down to what you want; Superpower is stronger, but it reduces Attack and Defense, and Earthquake is…well…Earthquake. Now, for the last: Ice Punch is stronger and more accurate than Ice Fang, but Ice Fang can flinch…with Waterfall as an option, Ice Punch may be a better option.

And for items: Muscle Band boosts Feraligatr’s attacks (no need to mention physical) by x1.1, and has no reduction in HP. Life Orb boosts by x1.3, but costs 10% HP every time you attack your opponent…unless you use an attack that is affected by Sheer Force. That’s right: Life Orb does not reduce a Pokemon’s HP when they have Sheer Force, and they use an attack that Sheer Force affects. So if you’re running Sheer Force, use Life Orb…running Torrent, use Muscle Band. And for ability: either flinching, or two 1.3 multipliers…take your pick.

A non-sweeping Feraligatr…yes, it is possible. I haven’t tested this out yet, but it should be effective. Waterfall is obvious, and because you won’t be faster than a lot of Pokemon, Sheer Force is an obvious choice. And since you’re not sweeping, go for +2 Attack with Swords Dance. Dragon Tail has -1 priority, but with proper IVs, Feraligatr will most likely survive an attack to use it. Your last move is a toss up. Earthquake is Earthquake, and Brick Break will remove Reflect and Light Screen…Earthquake will probably be used more, but it can be a surprise to an opponent when their screens shatter.

Another non-sweeping Feraligatr…it really CAN be done. Max out HP, and Feraligatr has 374 HP at 100, which means a decent Substitute. Some EVs taken from Attack and put into SDef can make it last a little longer. Now for the other moves. With Substitute in place, and being second to act, Feraligatr is almost always guaranteed to hit with Focus Punch. Waterfall or Aqua Tail…as much a common debate as any I’ve heard. Power or accuracy…your pick. The fourth depends on what the rest of your team has. Swords Dance doubles your attack, but with only Fighting and Water, you’re walled by a Water Absorb Jellicent. So Crunch and Shadow Claw are options instead…either chance to reduce Defense, or higher critical hit ratio. For this set, it’s Torrent over Sheer Force, since combination of Substitutes and Life Orb will activate it fairly quickly. A Salac Berry can be used over Life Orb so Feraligatr can get a bit of a Speed boost, and after you activate Torrent, Feraligatr lasts a little longer