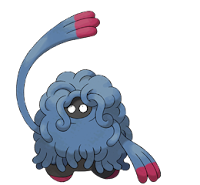 Sticking with last month’s theme of tentacles….This month's featured Pokémon is Tangrowth. Besides, what better way to kick off March than with a Green (when the shiny is I guess) Grass Type Pokémon? This 4th gen walking ball of grass offers many different possibilities for battle, sports a wickedly cool shiny, and has a somewhat signature move that just sounds so cool!


Tangrowth has three abilities entering the 5th gen. And surprisingly all three are useful. While his new ability Regenerator (from the Black and White Dream World) offers nice combo for walling options, Chlorophyll and Leaf Guard are always useful when on a Sun team. The fifth gen also has upgrades for Tangrowth in the move deptartment as Giga drain received a nice little boost in power.

Tangrowth is the Vine Pokémon (well duh) and has long reaching arms made of vines that can be re-grown if necessary. At 6’07” this beast would not be a bush you’d want to run into. Something is familiarly haunting about Tangrowth to me though. It reminds me of one of those kindergarten letter characters gone wrong. But anyhow it does serve as a huge upgrade to its Gen 1 basic Tangela, who sadly despite his cute little shoes, is ignored. Although Tangela has decent stats, he looks in-formidable (and usually is) and thus isn't used. And by the way, I always thought those shoes were probably crocs. Just saying.

Anyhow, Tangrowth has pretty good stats, but isn't your typical “special” Pokémon. It has base 125 Defense and 110 Special Attack, which is an odd mixture. That being said, its physical attack (base 100) and HP (also base 100) provide an exciting mix of relatively high stats, giving Tangrowth flexibility. Here are some nifty move-sets for Tangrowth:


Wallgrowth
Ability: Regenerator/Leaf Guard
Item: Big Root/Leftovers
A basic wall set. Set up Block and Leech Seed. While your opponent is stuck and slowly losing HP, you can keep your Tangrowth nice and healthy with Giga Drain and Synthesis (or Ingrain). Synthesis works better on Sun teams, but Ingrain only needs to be used once.

Another Wall…Jeez
Ability: Regenerator/Leaf Guard
Item: Big Root/Leftovers
A similar wall moveset, however this doesn't require you to lock your opponent in play. Using Toxic and Leech Seed you can drain your opponent. Protect plus Leftovers can help heal the Tangrowth (and Ingrain if you choose to have it). Giga Drain is also for healing.

Special Attacker
Ability: Regenerator/Chlorophyll
Item: Wise Glasses, Life Orb
This moveset is incredibly straight forward. Focus Blast covers Steel-types, Leaf Storm/Giga Drain/Energy Ball gives Tangrowth a good Grass type move. Leaf Storm is the strongest, but will cut Tangrowth's Special Attack. Energy Ball is the next strongest move, and finally Giga Drain is the weakest.. but it heals. Shock Wave covers Flying types, and will surprise a lot of people. It's also is a plus that it doesn't miss. Sludge Bomb/ Ancientpower/ Hidden Power/Hyper Beam round out the moveset, depending on what you want to run with. Sludge Bomb takes on other Grass types. Ancientpower can be used in place of Shock Wave for taking on Flying types (and Ice). Hidden Power can be any type, but a Fire type would be best. It covers Ice and Bug (which Grass is weak to), and Steel or Grass for Super-effective damage. Hyper Beam is strong, that's the sole reason to have it.