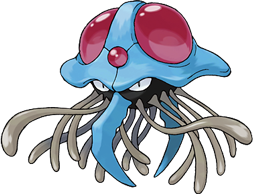 So February has rolled around and love is in the air once again, which is why this month’s feature Pokémon is Tentacruel. #73. In the playbook Tentacruel has sadly never been #1 in our hearts. People just don’t like jellyfish, and along with the Geodude and Zubat lines, Tentacool are some of the most common pokémon in early games. The Pokédex entry is sort of interesting, proclaiming that Tentacruel has 80 poisonous tentacles which can extend seemingly endless distances due to water absorption and can form a net to trap enemies.

However, behind the terrifying exterior is a warm cuddly water/poison type with walling capabilities and good speed. The water typing and the ability to learn Hydro Pump gives Tentacruel great coverage for its weakness to ground, while the poison typing eliminates the pesky grass weakness of water. While Tentacruel suffers in the physical realm it gets both Barrier and Swords Dance to boosts those stats and two nice physical stab moves: Poison Jab and Waterfall.

Tentacruel really shines with Speed (base 100) and Special Defense (base 120) and has somewhat respectable Special Attack (80) and HP (80). With high powered stab special attacks like Muddy Water (HGSS tutor), Hydro Pump, and Sludge Bomb Tentacruel is a very effective Special Attacker. Tentacruel will also get a serious boost in Black and White with the addition of the Dream World ability Rain Dish, a ghost move called Evil eye which does more damage if the opponent has a special condition like Poison, and Sludge Wave (a slightly more powerful version of Sludge Bomb), venom shock (which doubles in power if hitting a poisoned opponent), Boiling Water (a water move which causes burn), and Aqua Ring for restoring health). In the end Tentacruel may not be a world beater, but it is a good lead to scout the opponent and set up toxic spikes. The future looks bright for this Cnidarian! Here are some move sets with which to render your opponent confounded and unhappy.

Quit hitting yourself (Confusion based wall)
Item: Black Sludge/Leftovers
Stats. 252 Speed, 150 sp Att., 108 Sp. Def.
Moves:
-Water Pulse/ Muddy Water
-Confuse Ray
-Magic Coat/Protect
-Barrier
Start with confusion or Barrier and then fire away with moves that lower accuracy like Muddy Water, or could continue confusion with Water Pulse. While this is a little tricky banking on confusion, it can be nice to get rid of pesky opponents and force a switch.