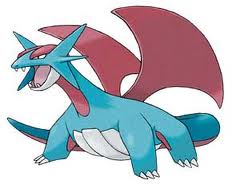 Salamence, Pokemon #373, and one of the pseudo-legendaries. And my favorite Pokemon, if I may add.

Salamence has made a name for Dragon-types, being more powerful than the first Dragon-type introduced, Dragonite. Since then, only legendary Dragons are stronger in both Attack and Sp. Attack (base 135 and 110 respectively is not something to be taken lightly). With a base 100 Speed, and Dragon Dance as a possible move, Salamence becomes virtually unstoppable after a couple Speed and Attack boosts.

While the physical-special split was unkind to quite a few Pokemon, Salamence embraced it with open arms (or claws). Dragon Claw was made physical, which means Salamence can use its 135 Attack (which maxes out at 404) to boost a STAB base 80 attack that only Steel-types resist, and only Shedinja avoids completely. But Salamence is not a one trick pony: with plenty of special and physical attacks to choose from, you can’t always predict what someone has set on their Salamence. For physical, Salamence can easily run with moves like Dragon Claw, Aerial Ace, Stone Edge, Earthquake, Zen Headbutt, Fire and Thunder Fang, Crunch, Shadow Claw and Dragon Rush, with a Dragon Dance to increase its strength. Its special moveset doesn’t lack either, with Dragon Pulse, Flamethrower, Draco Meteor, Hydro Pump, and Ominous Wind looking like good choices. With the right moveset, Salamence can destroy entire teams outside the Uber tier.

Salamence’s ability, Intimidate, reduces the Attack stat of the opponent by one stage…which helps with its rather low Defense. You can also switch out after Intimidate kicks in to something more suited for the opponent, then switch back to Salamence for Intimidate again. Really quite useful against other physical sweepers in the Uber tier.

Now for its weaknesses. Seeing as how Salamence is a Dragon/Flying type, it has two x2 weaknesses (Rock and Dragon), and the dreaded x4 weakness to Ice. Salamence isn’t the only one with this issue, but with its less than ideal defensive stats, it can’t survive an Ice Beam from an Uber. The only solution is for Salamence to be faster than its opponent, and take it out in one shot; however, this is sometimes easier said than done.

Regardless, Salamence is right where it belongs; in the Uber tier. It’s too good for OU, so it belongs with the Uber legendaries, Wobbuffet the blob, and its fellow Dragon pseudo, Garchomp.