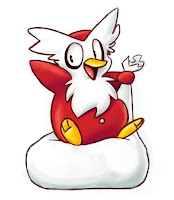 Delivering Presents just in time for the holidays is 225th pokemon, Delibird. Delibird is known as the Delivery Pokemon, and first appeared in the pokémon games Gold and Silver. This Ice/Flying Pokémon originally could ONLY be caught in Silver, but has since been found in the wild in more games, such as FireRed, Colosseum, Diamond, Pearl, Platinum, and of course, Soul Silver.

Delibird keeps food rolled up in its tail, which it uses to feed its chicks awaiting its return. Delibird is a generous Pokemon, as it is known to share food with people who are lost in the mountains.

The only attack Delibird knows in the wild is Present. Present is a physical attack of a non-specific power that gives a booby-trapped gift to the foe. Sometimes, however, Delibird will give its foe a present that will restore HP. I'm not sure if Delibird just accidently picked out the wrong gift to give, or maybe its SO generous, it couldn't help but to heal its foe a little bit. Either way, the move Present is quite the double-edged sword.

Delibird overall is merely a mediocre Pokemon, with not one of its stats breaching 300 at its best. Its highest stat is HP, followed by speed, and then special attack. The kicker is that it's only known move is physical, and so are MOST of its other learnable moves. It can learn moves by way of TMs, Move Tutors, and Breeding.

So, could Delibird be used at all? Of course it COULD be used, but I wouldn't recommend using it as a competitive pokemon. Delibird is a well rounded Pokeathlon contestant though, with at least 3 stars in each of its Pokeathlon stats.


So, if Delibird is not that great of a Pokemon, then why would we feature it as the Pokémon of the Month? December is often associated with gift giving and generosity due to the holidays, and what better Pokémon than Delibird is there to represent this? Look at it! It even looks like it has holiday spirit!
Email Post
Labels: 4th generation featured johto pokemon