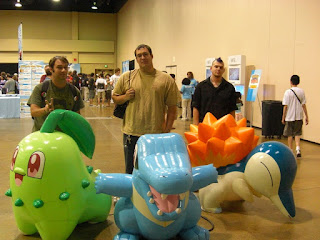 I just got back from an extended stay in Georgia this past weekend. While I was there the past two weeks, I got to attend the VGCs held in Atlanta. Earl and I made the trek from my hometown of Statesboro, Ga and Aaron met us there. Unlike last year, they let in people based on a first come/first serve basis rather than lottery so we all made it in.
We all did rather well in my opinion. Initially, we got there thinking the tourney was single format, but it turned out it was double so we had to come up with new team combinations on the spot, and after 20 minutes of the staff trying to get everyone in line to make the perfect wave... we finally got to battle.
Aaron's team beat me twice while we were waiting in line, so I made an additional last minute change. Aaron got in before me and faced someone starting with a Kyogre and Dialga... and got double critical hit from 'em. It's really hard to come back from that... so Aaron didn't make it to the 2nd round. 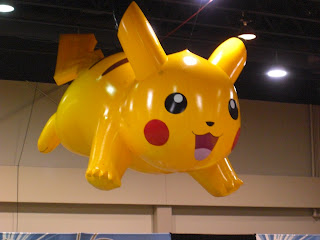 While I was waiting in line I got talking to several people and unfortunately got paired with a nice kid named Justin. The battle was relatively close, but ultimately ended with his Gyarados vs my Registeel which wasn't exactly even. Registeel paralyzed the Gyarados with Thunder Wave then Seismic Tossed it's way to a win. Earl also did well in his round so we ended up making it round 2.
My round 2 started out BAD. It was my Rayquaza and Wobbuffet vs a Mewtwo and Slaking. I was basically just trying to survive for a while, but thanks to a Thunder Wave from my Registeel and the speed of my Aerodactyl and Rayquaza, I was able to make a come back. The battle was really close right up to the end and I managed to pull it out to make it to round 3. I saved this video and uploaded it so if you have Platinum, HeartGold, or SoulSilver you can watch my battle. The search number is 36-03894-02110. Earl got put out this round, but I'm not entirely sure how... he just was... sorry I'm not able to got further into Earl's defeat. My round 3 was rough compared to earlier rounds as the girl I was facing obviously knew what she was doing. She began with Groudon and Shiftry, with the duo working quite well together. Groudon's Drought started sunny conditions and Shiftry's Chlorophyll raised it's speed. I began with Wobbuffet and Rayquaza again which effectively shut down Groudon's Drought. Unfortuantely for me, the Shiftry hit my Rayquaza with Fake Out so I didn't get to take out the Groudon with Ice Beam... and then the Groudon hit Rayquaza with Dragon Claw which took him out instead. After that, I sent in Aerodactyl. I was able to take out the Shiftry with Ice Fang, but only after it hit my Wobbuffet with Dark Pulse. Next, Groudon hit both my pokémon with Rock Slide finishing off Wobbuffet and Aerodactyl. I took out Groudon with my next pokémon, Dusknoir... but she too had a Dusknoir as well as a Palkia as her last pokémon. In the end, two against one assured her the win. All and all, the tourney was really fun and despite the fact uber legendaries were allowed, was a good format. I took way more pictures, and I'll post them soon.
Email Post
Labels: pokemon tournament vgc