Red doesn't have nothin' on me!

So I beat Red on Mt. Silver the other day so the story mode is behind me. Now I'm simply doing side quests, finding items, trading myself to fill my dex, and raising new pokémon. I have a couple interesting stories that I'd like to share from my travels today. 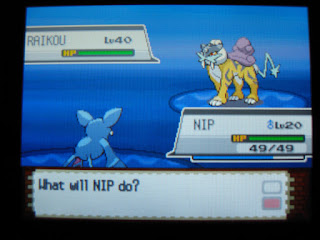 The first relates to the runners Entei and Raikou. I haven't really tried to track them down because runners get on my nerves... but Entei and Raikou had other plans I guess. The first one I ran into was Raikou shortly after I ran them out of Burned Tower. It was wierd in that I learned something interesting about the runners. Apparently, unlike in Gold/Silver/Crystal, Raikou and Entei can run on water. As you can see to the left, my poor little Zubat wasn't up to fight him.. so I just chunked a ball. He promptly broke it and ran off. I still haven't tried to catch him again, but if any of my readers are trying to catch him, keep in mind he could be in the water so be sure to bring a surfer along with some pokémon to keep it running with either Mean Look or some ability (like Arena Trap on Dugtrio or Shadow Tag on Wobbuffet) to keep it from running away. I had more luck with Entei, which also showed up early. Like with Raikou, it appeared when I wasn't quite ready to battle it.. so I threw a Fast Ball. It caught it right off the bat and it was an attack nature so I was pretty stoked. So, in addition to the tips I gave you earlier to catch Raikou make sure you stock up on Fast Balls from Kurt. 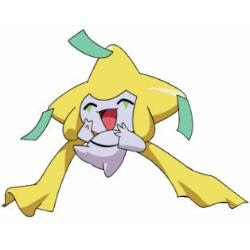 The second thing I want to talk about are the two event Pokewalker courses, Yellow Forest and Night's Sky Edge. First of all, anyone with Wifi access can download the Yellow Forest course between now and and May 5th. As for Night's Sky Edge if you have the event Jirachi that was given away from Gamestop before HG/SS came out you can unlock the area.

Strangely enough, I haven't traded my Gamestop Jirachi to HG/SS yet... but I did migrate one of my old WISHMAKR Jirachi from the PKMN Colosseum Bonus disc and it unlocked the Night's Sky Edge. Now, before I declare this to Serebii I would like someone who DOES NOT have the Gamestop Jirachi or hasn't sent it thier HG/SS to message me or reply. I want recorded proof that ALL event Jirachi unlock the event. Some of the users of Serebii tend to be jerks if I say I discover something they haven't already and don't have video taped data.

Anyway, both of these courses are must haves as Yellow Forest has Surfing and Flying Pikachu (although they are very rare, they are only in patches that have three "!". Originally I thought it was four but as it turns out the max is 3) and the Night's Sky Edge has Clefairy and Jigglypuff as well as Moon Stones.
Email Post
Labels: 4th generation HGSS mythical pokemon