New VS Old... is Pokémon getting worse over the years?

This is a common topic I keep hearing about on a group I've joined on Facebook. There seem to be two factions, people who hate the new pokémon games after Red and Blue... and those who do not. I, obviously, belong to the latter. I think that every new pokémon game has expanded the game in some way as well as kept it relevant. Since I am for this side I am going to explain that point of view and welcome anyone who wants to argue for the other. (I'm not going to argue for or against Contests or Pokéatholon as these are optional side quests and if you don't like em... don't do 'em... that simple.) 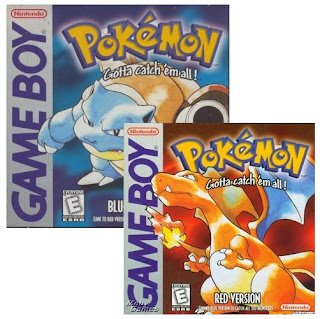 First of all, many people in the "old school" have the main argument that 150 pokémon is enough and that more makes things too complicated. My counter-argument for that is this: If there were only 150 then the game wouldn't have had the longevity it does now. Filling the Pokédex in the old games only requires a couple of days, and if you own both versions... not even that long. Also, when it comes to battling, I remember the old days... I remember everyone's team was pretty much the same. Just about everyone had thier starter, Gengar, Alakazam, Rhydon, Gyarados, and Mewtwo. Sure there was some variation, maybe swapping Gyarados for Lapras or something... but the point being... it was VERY predictable. Fun for a while, but things needed to be added.

Thus Gold and Silver (and later Crystal) were added as sequels. They introduced new game and battle mechanics as well as better graphics. The addition of Eggs and Held Items increased the customization ability for your pokémon. Now you could breed your pokémon to know moves it couldn't normally learn as well as attach items to make it more effective in battle. 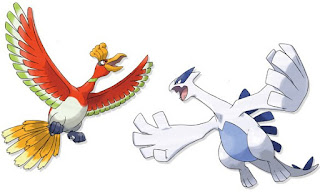 Another problem that Red and Blue had was the vast superiority of Psychic types and by adding Dark and Steel in these games, Psychic was balanced out. As with any different part of the world, the animal and plant life was different as well as the mythology. If you think about it, Kanto (the region from Red and Blue), has NO mythology. The legendary birds Articuno, Zapdos, and Moltres are legendary based on thier rarity, but without the back story made for them in the 2nd pokémon movie... there is no backstory for them. As for Mewtwo, it isn't legendary in the since it's lived for ages as some of the new legendary pokémon. It is legendary because it was created by science and is more powerful than even Arceus in some respects. The legends of Johto, however, actually have a story behind them: The Legend of the Burned Tower. Same for Lugia in the Whirl Islands, but to a lesser degree. These stories are meant to widen the world of pokémon and make it more believable.

Shinies are often brought up as something "old schoolers" don't like. Thier argument is, "if they are so rare, why do we need them." Well, you don't need them, you want them. That's two different things. Shinies are for bragging rights (and Gold and Silver straight up gives you the chance to get a Shiny Gyarados). A lot of games have lofty goals that, while unrequired, we strive for as bragging rights. For example, on XBOX 360 the game Resident Evil 5 has an achievement for 50 points that requires you to block a bullet with your knife. That is VERY hard to do. However, there are methods to get shinies easier. In Diamond, Pearl, and Platinum the item PokéRadar can attract them, reducing thier 1/8000+ ratio to a mere 1/200. Not only that, it shows you where in the tall grass they are. 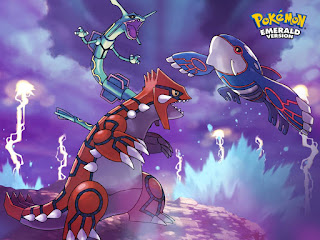 Ruby and Sapphire (and later Emerald) continue to broaden the world of pokémon in a similar way. Now, I will admit I was sad that it wasn't compatible with older versions.. but when FireRed and LeafGreen were released, along with Colosseum, it wasn't as bad. Catching the pokémon I had before again was a pain, but exploring new areas was fun. Again, the Hoenn region has it's own mythos and animal/plant diversity as well and it introduced more legends. As Gold and Silver had it's phoenix legend in the form of the Burned Tower legend, Hoenn had the legend that Groudon had saved the region from a horrible flood and Kyogre had saved the region from a terrible drought. With the addition of Emerald we get the back story of Rayquaza, a dragon with the ability to qwell the weather abilities of the two titans Groudon and Kyogre should they ever meet to do battle. The other legends of Hoenn include Latios and Latias (which have no back story so it's assumed they are legendary due to thier rarity) and the Regis (Regirock, Regice, and Registeel). The Regis represent the progression of human technology (which is why they look robotic). Regirock represents the stone age, Regice the ice age, and Registeel the steel (or bronze) age.

Battle changes incule the addtion of 2 vs 2 battles (which were in the anime long before due to Team Rocket), abilities, and natures. "Old schoolers" tend to not like this either. First of all, abilities have been around since the beginning of the Pokémon Card Game in the form of Pokémon Powers. The video games just copied that concept. Abilities are nothing short of great when it comes to revamping some of the older pokémon. Take for example Gengar, in games before Ruby/Sapphire it was weak to Ground since it was half Poison. This makes little sence as Gengar is a Ghost which in the anime is shown floating. Now with it's Levitate ability, it is immune to Ground.. as it should be. Natures also seem to be hated for some reason. Natures are only there to help people who raise thier pokémon to fight competively. If you don't, then just ignore it.. but before people like me would have to raise a pokémon to 100 to determine if it was really good for what they wanted it to do (for example be a fast Aerodactyl). Now, I can get an Aerodactyl and if I see a nature like Jolly, I know it will be fast or if I get an Brave Tyranitar I know it will have high attack. How is this bad?

Finally we come to the latest gen: Diamond, Pearl, and Platinum (and Heart Gold/Soul Silver). 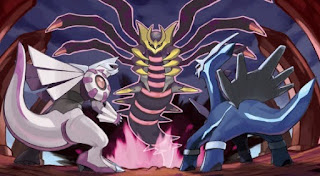 These added the ability to play against your friends worldwide via Wifi connection. I personally love this because as I have grown and moved away from many of my friends who play, but I can still play against them over wifi. I also have made friends overseas (namely Germany and Japan) by discussing trades with them on message boards. Battle-wise not much new was added in the department of mechanics outside of Characteristics which are just flavor text that give more insight into your pokémon's personality and what it's good at. For example, an Aerodactyl that's Jolly (nature) and Likes to Run (characteristic) is going to be very fast. This addition only further helps training pokémon, and like natures if you don't care to raise your pokémon competively then ignore it. D/P/Pt did add more legends than previous regions, but the legends of Sinnoh are more indepth than previous regions, as it is a creation of the world myth I'm not surprised.

Basically, the Original One (Arceus) was born within a churning sea of Chaos. To bring order to the Chaos it created Dialga to rule time, Palkia to rule space, and Giratina to rule the Distortion World where the laws of time and space do not reach. Giratina, being rebellious, angered Arceus who banned it to the Distortion World alone. Then Arceus created Azelf, Mesprit, and Uxie to counter balance the power of Dialga and Palkia and to foster determination, emotion, and knowledge in a young human race. There are other legends in Sinnoh, but they do not relate to the creation story. Cresselia and Darkrai are legendary in that they are pokémon able to influence the world of dreams, Cresselia positively and Darkrai negatively as this creates a balance. Heatran is simply a rare pokémon that is said to inhabit the large volcano north of Sinnoh. Finally Regigigas is the king of the regis from Ruby and Sapphire. 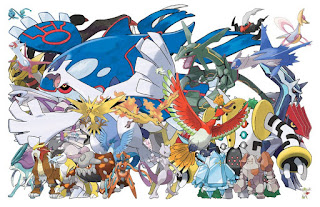 If you go anywhere in the real world, there will be mythos.. usually different than mythos from where you are from. The pokémon world mirrors this in both mythology and animal/plant diversity. I think the main problem with the "too many legends so no one is a legend" argument is that 1) "old schoolers" don't understand there are degrees of legendary and 2) that many mythos stories contain many legendary figures. Also, there are only roughly 30 legends out of 493 pokémon. That means that only about 0.06 of pokémon are legendary. In most competitive circles, pokémon determined to be overpowered (or "uber") are banned from play so they don't really affect gameplay. As for the levels of mythos, think of it this way.

Most polytheistic (multi-gods... think Greek Gods) societies have a god for everything. Pokémon is very similar. Pokémon I would deem as the God Level (those with powers similar to Greek Gods) would include:
Demi-god level is similar to figures like Hercules. They are legendary due to thier great strength or abilities granted to them by the gods. Mewtwo is in this category as well as Articuno, Zapdos, Moltres, Entei, Suicune, Raikou, Registeel, Regice, and Regirock as well as Latios and Latias. Demi-gods usually have close ties to gods either being sons or daughters ... or in some instances simply being created by a god.
The rest are what would be considered to be crypto-creatures. Animals which have gained legendary status due to thier extreme rarity or lack of evidence to thier existance. Bigfoot and the Loch Ness Monster as well as aliens are real world examples. People believe they exist, but evidence is lacking. Pokémon that fall in this category are: Mew, Celebi, Deoxys, Jirachi, Heatran, and Shaymin.
Personally I will continue to buy pokémon games as long as they continue to make them. Any opinions? (All legends pic by SonofOdin.)
Email Post
Labels: 1st generation 2nd generation 3rd generation 4th generation hoenn johto kanto legendary mythical opinion sinnoh