Promos, new computers, and such

Just a little bragging on my part, check out this gem of my collection. This promo Mewtwo is special. Look in the lower left hand corner. The Pokemon logo which should be in the upper right hand side of the artwork is instead in the lower left hand side of the card... AND UPSIDE DOWN. I am currently trying to determine it's worth as I've never seen one like it. More news on this soon. 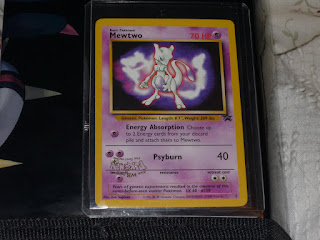 Here's a better view of the bottom of the card. 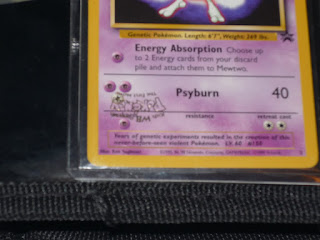 Sorry I never got around to the lofty goals I set for myself last month, as it turns out the computer I had previously was on it's last leg. I just got a new one, but it came with it's own share of problems. Here's a long story short. I went to Best Buy to get a new laptop. The guy there suggested I get a Toshiba and he presented some very good points, so I did. I paid extra for them to make recovery discs which I was to pick up in an hour or so. I had to go out of town after buying the laptop so I told them I couldn't wait, but they said that was fine and they would call me when I could pick them up. Well, they never called and my Internet Explorer stopped working completely as soon as I left town, it wouldn't even open. Once I got back to town they said that some of the Toshiba's have a virus that they somehow pick up between the factory and Best Buy. (There was a returned Toshiba on the Customer Service desk when I went there, lol.) They gave me the recovery discs and told me I would have to recover my computer. This took several hours, plus I had copied everything from my old computer onto the new computer, so I had to do that again. Currently it's working ok.
Email Post
Labels: legendary pokemon trading card game