So I was randomly surfing the web today when I happened across a picture. It's a picture from the Pokemon Emerald Battle Brain tournament a couple years back that shows all the competitors. I was quite surprised to find this, as it was a picture taken by a Nintendo rep- but never made it into Nintendo Power. In fact, from the article about the tournament myself and a couple other contestants are completely absent. Not even a picture.

Well, anyway, after finding it I decided I would post it on here. Enjoy. 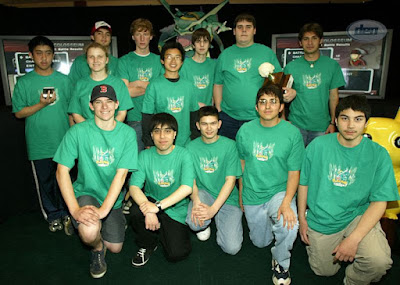 In order from the left we have Travis, Stephen, Mike (Skarm from Smogon), Chris, myself... um.. another guy, Christa, Charles aka "Chalkie".. and I dunno the names of the guys in front...
Well, I'm sure there's a list somewhere. I spent most of the time during the tourney hanging with Earl and talking with Chris a bit since we where both from the Brave frontier (Southeast region) and afterward hanging out with Travis, Steven, and Mike so I didn't really meet the other guys as much. The guy in the bottom middle, however, was at the Nashville Regionals which was cool. I don't know if he got to compete or not. What would be great is if he somehow runs across this post and emails me his experience. That'd be awesome. I'm going to roam the internet to see if I can find any information, maybe a name list or something, so that the people who competed could potentially Google themselves and find this. It'd b interesting to catch up with them, see if they still play, etc.
Email Post
Labels: 3rd generation battle brain battle frontier RUSAE tournament