Team Knockout at the Nashville Regionals

Today is the first time since last weekend I've been able to post on Team Knockout's trip to the regionals in Nashville. To make sure we arrived on the time, Lauren had us wake up early to be at the convention center bright and early at 6:30am. Originally a good idea, however due to the tournament being based on a lottery system our arrival time didn't really matter. Once we finally got into the tournament we got registered. We were given wristbands with the names and numbers of pokemon which would be drawn later to determine who would actually get to play in the tournament. Lauren was given Nidorina, Earl got Arcanine, and I was given... ugh... Shellder. As soon as I got the wristband I knew that was some kind of bad omen. Afterward we went around and took some pictures with the pokemon characters. 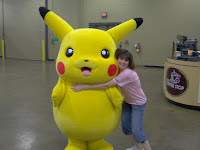 We wasted some time walking around the convention center where the tournament was being held and it was really nice. It had what bacially was an indoor grotto/forest. We took some more pictures of the scenery and then headed back to see who was going to participate in the tournament. Lauren was really nervous since it was her first big tournament and she was really worried that she wouldn't get in and be able to play. After a large group picture taken of all of the potential contestants and an odd dance party held among the pokemon mascots, we all stood with held breath infront of the monitors which held out fate. As we watched as both Nidorina (Lauren) and Arcanine (Earl) were shown, but Shellder... as I had feared... was absent. 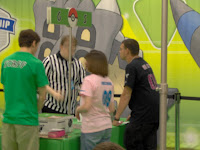 So yes, sadly after all of my preparation and work helping Earl and Lauren get ready, I didn't even get to compete. Despite this tragic setback I was happy that Earl and Lauren made it in so I was supportive and didn't complain. I took pictures of Lauren and Earl competing in the tourny while also battling other people who were unfortunate like myself. The battles were hard fought and I have several videos that recorded that anyone with a Platinum can watch. Simply search by the battle number in the forth floor of the Global Terminal in Jubilife City. There are a couple training matches between Lauren, Earl, and myself; a team battle with Earl and I vs two trainers from Florida, and a battle between myself and one of the participants in the tournament. 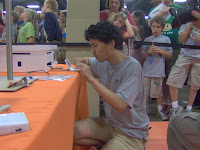 Both Lauren and Earl did well in the tournament and I am proud of them both. It was a lot of fun, but hopefully in the future Organized Play won't use the lotto system and allow for everyone to play, or at least make it first come serve. The final round of the tournament was a little anti-climatic as well. The winner of the tournament, Allen (the guy in the picture), had a team composed almost completely of legendarys, and even if they were the ones allowed in the rules, it was still kind of lame. To see the match the video number is 55-41110-08516.

Starting Monday I am going to post 3 Team Spotlights discussing the teams we raised for the tournament instead of Pokemon Spotlights. The videos will show you parts of the teams for a bit of a spoiler for the upcoming spotlights.
Email Post
Labels: 4th generation dppt pokemon sinnoh tournament vgc