My name is Mattock Ginkgo and I study fossil pokémon. My family moved from Unova when I was a kid, but at one point I had it in my head that I would be a pokémon master. I can't say my goals were particularly different from many other kids my age. Just about everyone I knew thought they could become a champion. Most don't even get enough badges to even try to take that title. I had collected my badges and gotten entry into several league tournaments, in several regions, but I learned pretty quickly that becoming the "best" wasn't in the cards for me. There's a difference between being good and being great. The kind of difference you don't recognize when you're ten. Of course, not everyone has the same potential in the same areas. Although I realized I was only an ok battler, I learned quick that I was more interested in learning more about pokémon, especially those of the past.

As my train pulled into the station my mind was still wandering through my own past. Unova has changed since I was here last. In some ways, it is for the better. In some ways, not so much. Sometimes I wonder, am I responsible for at least a little of the negative? I certainly knew I had played a part. Maybe now I can be responsible for something more positive. I had returned to Unova a few years back as part of paleontological research group while finishing my professorship. I don't think anyone would have ever described me as "cheery", but I was definitely more so at the beginning than by the end. A mistake was made. A mistake that still haunts me. After that project, things had changed. I learned that knowledge can be a tool, and a tool is neither good nor bad, but tools can become weapons and weapons can be catastrophic.

"Don't forget your bag sir," the train conductor reminded me as I left my seat.

"Thanks! I wouldn't want to show up to a job interview with no résumé."

"That would be bad!" he said as he stamped someone's ticket, "What's the job?"

"Museum curator, " I said, probably with more excitement than my face seemed to suggest.

As I left the train I realized how much I had forgotten about Nacrene City. Compared to other parts of Unova, it's only a city in the strictest of sense, especially when compared to Castelia City. Recently  the old tracks that run to Nacrene had been repaired so that visitors could take the train to Nacrene from Castelia. With the track repair Nacrene had begun to become easier to visit and was slowly growing into a tourist site. Specifically, the museum was flourishing with the influx of daily visitors.

Nacrene had a history as an old train town, and the museum had recently been renovated to feature a large train exhibit. With the growth of the museum, and the shifting of staff, the museum finally had created a new museum curator position. Luckily for me, someone else wanted the train curator position, leaving a paleontology position open.

I walked past the reclaimed train depots, now hipster housing and cafés, on my way to the museum. I had been personally contacted by the museum's director to come interview for the position, so I felt good about my chances. Perhaps she remembers me from my old gym run years ago? I half hoped my team left an impression, at least certainly the trainer in me did. The rest of me, not as much. I noticed her immediately as I walked toward the entrance to the museum. Not a lot of people I've met command a presence like Lenora. Tall, confident, pretty much exactly like I remembered. 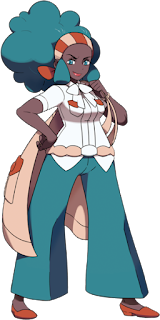 "Professor Ginkgo! Glad you made it! You're even a few minutes early. I thought you might be running behind since the trains have been a little off schedule," she said with a smile.

"Well, I wouldn't want to make a bad impression."

"Good for you! Let's step into our meeting room. My husband Hawes should be in shortly."

Lenora led me down into what had once been the site of her gym and office. I remembered it from my battle with Lenora almost a 5 years ago. Since the museum no longer functions as a gym, Lenora had converted the gym portion into a meeting room and library. Hawes shuffled in a few minutes after we sat down.

"Professor Mattock Ginkgo! It is amazing to finally meet you! I've read all of your work on fossil pokémon! I hope I haven't kept you both waiting," Hawes said, scratching his head, "I was cleaning a Yamask mask replica and lost track of time."

Lenora assured Hawes it was fine and they began asking me the standard sort of questions you would expect. I talked to them about my previous research projects and positions. Lenora even asked me if I had ever taken the Unova League challenge. I responded that I had.

"I knew it. I knew I remembered you, you challenged me with a fossil pokémon! We  didn't see that many around prior to offering fossil rejuvenation ourselves," she said laughing.

I forced a smile, "Yea, that would have been one of my Aerodactyl."

"Well, you know what that means. We're going to have to wrap up this interview with a battle." Lenora said as she went over to her desk to grab a few pokéballs.

It's a good thing I didn't forget my bag on the train. I didn't really prepare myself well for a battle, I only had three pokémon with me. The rest were with my wife and daughter back home in Castelia. Then again, I don't battle nearly as much as I used to. Battling doesn't bring quite as much joy as it used to. At one point there wasn't a day that went by where I didn't battle someone. Now, it may be weeks or months between battles. I try to still keep my pokémon sharp and trained, but they rarely see any real action.

"Since I know you competed in the Unova League, I'm not going to hold anything back," Lenora quipped. "You shouldn't either. I have a few meetings this afternoon, so let's just go one on one. Your best pokémon versus mine."

I sighed in relief to myself, at least I'm not as ill prepared as I thought. I'm not sure  how the battle will affect my job interview, but regardless, I didn't want to seem like I'm not prepared. Since I only have to use one pokémon, she won't know that I wasn't exactly ready for this. Despite only bringing three slightly rusty battlers, I'm sure I can still hold my own against whatever normal type she throws out. As I fumble through my bag for a pokéball, I see Lenora motioning to a door behind us.

"Since the museum is no longer a gym, we typically battle out back. It's safer for the exhibits as well as my office," she said. "Honestly, I never was a huge fan of having battles in the museum."

We stepped outside into the wooded area behind the museum. Beneath the tree cover a large area had been cleared. Based on the patchy areas of grass that appeared trampled and scorched, it was obvious that a battle had happened recently. Hawes stationed himself to judge as Lenora and I walked to opposite ends of the makeshift battlefield. I had my pokéball ready. I had decided who I wanted to use during the walk outside, however I was still curious as to who Lenora was going to use. She knew I used fossil pokémon against her before and maybe even remembered what attacks my Aerodactyl knew. I had decided to use a pokémon I hadn't used against her before, but I wonder if she would anticipate that. I tossed my pokéball in the air, as overthinking things wasn't going to solve anything. The pokéball burst open and a flash of light hit the ground. Quickly the light grew into an intimidating silhouette before materializing my choice, Tyrantrum.

"Ok, Grimlock," I said, actually getting a bit excited by the prospect of battling the ex-gym leader again, "Let's see what Lenora's got in store for us."

Grimlock let out a mighty roar, and stomped a foot to the ground. I'm sure the noise was already disrupting some of the visitors in the museum, who I could now easily see in the windows. I could also tell Hawes was in awe. Seeing a fossil pokémon at all is a rare sight, one from a different region is even rarer.

"Don't think using a Kalos pokémon is going to throw me!" Lenora tossed a heal ball in the air releasing her pokémon on to the battlefield. A Kangaskhan materialized, one of Lenora's top picks when she participates in the World Tournament.

"The one on one battle of Lenora, Director of the Nacrene Museum and Mattock, renowned Pokémon Paleontolgist, is about to begin! The match will be over when either trainer's pokémon is no longer able to battle," Hawes announced, showing he's often officiated Lenora's battles. "Battle begin!"

Posted by FossilJockeyMG at 4:59 PM No comments: