So Now We're Headed to Space?!

Last week Pokémon announced there will be a special new mission in Omega Ruby and Alpha Sapphire. This new mission, which they call the Delta Episode, most likely takes place after the main story. Just to warn you, if you haven't read on this elsewhere, I'm about to post some pretty big spoilers. First off, there is a trailer for it below...

It would seem that, based on this trailer, this is already a part of the game or it is an early event download. There have been post story missions in the past that have been activated by downloading a certain item or pokémon from an event. For example, downloading the Member's Pass in Diamond, Pearl, and Platinum would unlock a small mission involving Darkrai. This was only released for Platinum in the U.S. That being said, there have also been post story missions that are important to the story, but had not required a download. The best example would be the Looker Missions from X and Y. Usually, post story missions that don't require a download also don't feature any particularly rare pokémon. Since Delta Episode features Deoxys, it seems to make it more likely to be activated by some download. Regardless, it looks like it will be likely that we'll be able to capture our own Deoxys for the very first time since FireRed and LeafGreen, which was only available to people who lived near a physical Pokémon Center store. 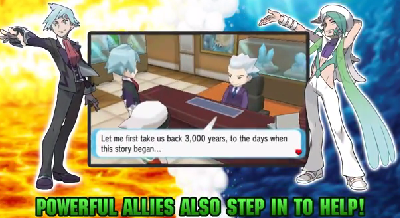 The mission itself involves stopping as asteroid from hitting the Pokémon World by going in to space... its basically Pokémon-aggedon. According to Mr. Stone, it would seem that the asteroid has ties to the events 3,000 years ago in Kalos involving Xerneas, Yveltal, and the "Ultimate Weapon". Wallace even mentions AZ as the "huge man who visited from the Kalos region". Interestingly enough, several of Deoxys' Pokédex entries relate to it once being an alien virus that mutated when exposed to a laser beam. It is quite possible that the laser in this scenario was the weapon AZ created. If that is the case, Deoxys is the second pokémon to have been created by humans. The video also adds a new character Zinnia, as well as confirms that Team Magma and Team Aqua will be involved. If this is a post story episode, I guess that means Team Magma and Team Aqua won't completely disband.

Whatever the case may be, one thing remains certain.... 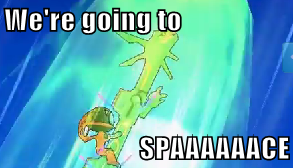 Posted by FossilJockeyMG at 9:53 AM

Getting The Most Out of Fearow

Fearow is one of those pokémon who's intimidating appearance and name set it up to be quite a formidable pokémon. It's too bad that Fearow has such a hard time living up to its name. It strikes fear in the hearts of bugs and rodents, but otherwise, it has a hard time competing with other common Flying types in the various regions. The poor guy is probably even more upset that its fellow Kanto native Pidgeot is getting a new Mega. Let's see if we can at least get the most we can out of Fearow!

Fearow is a Normal/Flying type, which is almost the most common type combination. It's up there with Bug/Flying. It is VERY vanilla. Granted, it's not the WORST combo. I think that right is reserved for Bug/Ghost and Grass/Psychic. Normal/Flying gives Fearow two immunities to two relatively common moves: Ghost and Ground. Normal doesn't really do anything for Fearow's weaknesses as it retains the Flying weaknesses of Electric, Rock, and Ice. Flying does get rid of the Fighting weakness, making it a standard damage attack. Fearow gets two abilities: Keep Eye and Sniper (Hidden Ability). Both are very situational, but Sniper is drastically better. Fearow has a couple moves with high critical hit chances, and Sniper will increase their damage if the move does crit. Keen Eye will stop people from Sand-Attacking you dropping your accuracy. This is only useful if you are Horde Battling Scraggy, otherwise it is pointless.

Statwise, Fearow is pretty straightforward. Attack and Speed are its best stats (Base 90 Atk, 100 Speed). It's not going to be running circles around much, and it'll likely tie with a lot of pokémon (Salamence, Charizard, Slaking, etc). 90 Atk is nothing too exciting either. It ties with Weepinbell. When running Fearow, you will likely be crossing your fingers for that crit to pop up to do most of your damage. The nice thing is critical hit damage will get around defense boosts, so there's that. Defense-wise, Fearow won't be taking a ton of hits. Your best bet is to try to hit first and roll a critical hit. Fearow is a lottery. It's just a matter of hitting the crit. That being said, at least it isn't as big of a lottery as Metronome.

Now for moves. Fearow has got moves. The most interesting thing is Fearow gets Drill Run, a Ground type move that also has a high critical hit ratio. Time it right, and you could potentially do a good bit of damage to an Electric or Rock type trying to switch in. Other interesting moves include Tailwind, Sky Attack, Return, Quick Attack, U-Turn, Pluck, and Pursuit.


With all of this info, I'm pretty on the fence with Fearow. Is it possible to even use it? Sure. You might get lucky and roll a critical VS Garchomp while your Tailwind is up and do tons of damage (maybe even OHKO it). Just don't expect that to happen too often. If you were to try to use Fearow, it fits better fighting pokémon like Raticate (although it pains me to say it). If you were to run Fearow, here is what I suggest.

Sniper On The Roof
Nature: Jolly
Item: Scope Lens/Choice Band/Life Orb
Attacks: Drill Run, Pluck, U-Turn, Tailwind (Return)
Strategy: Max out Attack and Speed in Super Training or by EV Training (252 EVs in each stat for you math people). If you do, your Fearow should be at 328 speed at 100, which is decent. Either have a partner or Fearow itself use Tailwind. This will cover speed issues somewhat. All of the items are meant to boost damage. Scope Lens is SUPER iffy. It's just if you want to try to boost the critical hit chance. It usually won't work though. Choice Band and Life Orb are more reliable. If you chose Choice Band, don't run Tailwind. Instead have a partner that can use it and have Fearow learn Return. Scizor makes for an EXCELLENT partner in Singles (which if I were to use Fearow it would only be in Singles or Rotation). Scizor can set up Tailwind once it gets it from a Move Tutor and it can Baton Pass Attack boosts from Swords Dance as well as Focus Energy.. which will increase your chances for a crit!
Posted by Unknown at 4:39 PM