Pokemon Bank and Poke Transporter, which were supposed to be released today, have been postponed due to server overload cause by Japanese players trying to download theirs on Dec 25th. Server issues were further increased by the sheer number of people trying to set up Nintendo IDs and Wii U/3DS systems they got for Christmas. Regardless, this seems like a drastic oversight by Nintendo. If anything, the Christmas season and the release of highly anticipated DLC would have had them up their server capacity.
It is important to note that Nintendo wasn't the only company that had issues. Xbox Live, the Playstation Network, and Steam all had problems. Nintendo, however, seems to be the company having to most trouble getting everything back up and running. As for when we will be getting Bank in the states, Nintendo still hasn't given a solid date. Currently the date is "to be decided."
We'll give more information as we received it. If you want to weigh in, reply below or on our Facebook page.
Posted by FossilJockeyMG at 5:44 PM No comments:

In the wake of X and Y: TKO's Longest Hiatus Ever! 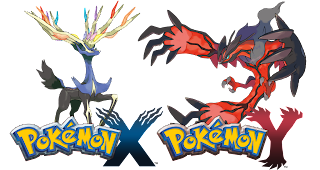 The time sure does fly! We've been so busy with our individual Pokémon X and Y games that Team KO has been on one of the longest hiatus's we've ever had! It's crazy! However, if you follow us on Facebook, you'd know we're still alive and kicking! Anyway, a lot has happened since getting our games. The general consensus on our Facebook page is that these games are simply amazing! In fact, if your someone who is looking forward to potentially getting these games for Christmas, see what some of our members have had to say:

"Honestly, I give the game an Immediate 5. Though Pokemon hasn't tried to change up their game plan when it comes to making a Pokemon game, they don't really need to. Pokemon X and Y are great examples of a series that needed a serious upgrade to challenge some of the other leading gaming companies and they did just that. I'm not a huge person on graphics as long as the game has a good story line but looking at this game and its past games, they have really come a long way. My favorite parts would have to include: Great storyline that keeps you interested, new Pokemon, Music, and characters. Probably the only thing that I dont like in this game is the release pokemon system [meaning he'd prefer to release more than one pokémon at a time]." -Josh P.

Alex N. enjoys that "they incorporated a great way for you to interact with other people from around the world. Also giving you a way to train your own team at an efficient and managable speed."

Also, one of our yearly Athens Regional Players Patrice L. says, "Score: 5, The main plot of the game was a bit "eh" IMO (Trainer AZ was pretty bland, and meeting Xernas was rushed a bit), but the new mechanics of the game made it very enjoyable. I love watching the 3D model animations. The shinies this gen are really good. Pokemon Amie is fun and it makes bonding wth your EV trained pokemon more uh...special? I LOVE the trainer customization. The music is superb (the OST is available to download so get it!) Gamefreak went above and beyond this gen. Im excited to see what they have in store for us in the future."

All and all, everyone we have talked to have really enjoyed this game, with the only complaint being the post game. I have personally heard some people complain some about the lack of post-game story. This doesn't seem to detract too much from the overall enjoyment, however, as many players refocus from story to team building during the post game. Not only that, there are a few post games quests (the Looker Missions) which are entertaining. If you have any opinions of X and Y, we'd love to hear them!

Posted by FossilJockeyMG at 1:34 AM No comments: