Many of you may have already been to Gamestop this past week, but if you haven't you may want to take yourself there soon! As of August 19th Gamestop began with a suite of pokémon events that will last all the way to October. Three of these events will be for Pokémon Black, White, Black 2 and White 2. From now until Oct 20th Gamestop will be giving away shiny forms of the dimensional trio: Dialga, Palkia, and Giratina! Dialga is already available. Dialga can be downloaded to your game via Mystery Gift, is a Lv 100, and knows the moves Draco Meteor, Dragon Pulse, Roar of Time, and Aura Sphere. This event is set to end on Sept 8th. For those of you unfamiliar with Mystery Gift, it is basically a free distribution of downloadable content. Therefore, if you have more than one copy of of a fifth gen game (like if you have Black and Black 2) you can download one to each game! 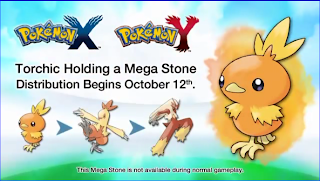 In addtion to these events, X and Y will be getting its own event! If you have been following us on Facebook or Twitter you would know that the day X and Y comes out you will be able to download a special Torchic via wifi hotspot. This Torchic is a Lv 10, and comes holding the rare Blazikenite. Blazikenite is a mega stone that allows Blaziken to become Mega Blaziken! Blazikenite is NOT available in game, apparently, so don't let this one go! If you miss out on downloading this Torchic you will not be able to have a Mega Blaziken! We'll keep you updated on any other events that will be coming stateside. If your not in the states, don't worry! You'll likely be getting these events as well. For example, European players can get their Shiny Trio from participating GAME locations. Just check with your local game franchise for dates.

A little bit of mystery here, but I wonder why we are getting the shiny Dialga, Palkia, and Giratina. The last time we got a shiny trio right before a new game it was the Shiny Entei, Raikou, and Suicune for Heartgold and Soulsilver. By uploading these shinies to Black and White you could unlock a special event with Zoroark. Is it possible that these new shinies will also get us a special event in X and Y? Only time will tell!
Posted by FossilJockeyMG at 8:33 PM No comments:

This past week we received some quite surprising news in the "forme" of mega evolution. Mega evolution, a new type of evolution, allows trainers to upgrade their Pokémon in battle to a new mode. Unlike standard evolution, this is more like the forme changing we've seen in Pokémon like Zen Mode Darmanitan. Mega evolution only occurs in battle and requires a new class of item, a Mega Stone. Mega Stones are species specific with Lucario needing Lucarionite and Blaziken needing Blazikenite. So far the only officially released Mega evolutions are for Lucario, Blaziken, Mewtwo, Mawile, Ampharos, Absol, and Kangaskhan.

Since their release, there has been a lot of discussion related to how they will affect gameplay. Many people are worried that they will increase the power creep we've seen over the generations (for example there are more high stat Pokémon in gen 5 than in gen 1). From here on out, I will be expressing my opinion.

These new Mega evolutions bother me a little, but less with their stats or anything competitive. I just don't like the "Mega" prefix. It makes me think a little about how digimon name their creatures, however I do realize that many Japanese games/anime use prefixes for powered up modes. I don't think it pulls away from creativity, but I do wish they had chosen a different prefix. Now, it is possible that they aren't actually "named" Mega in play. For example, making Giratina change to Origin Forme Giratina doesn't change it's name. It's still just Giratina. The community just knows it's Origin Forme Giratina.

On a more competitive stance, I'm not going to say that the Megas won't be incredibly overpowered. There's no way to know. However, hopefully stats won't increase too dramatically. Maybe they will just shuffle stats around. I do see potential here though. As there has been the power creep slowly making the standard of competitive play higher, Megas could bring older Pokémon into the competitive play environment. For example, Kangaskhan is good, but it is commonly passed over for stronger Pokémon. Now with it's Mega evolution, it gets a new ability, Parental Bond, that allows it to attack twice. This could truly be a great way to get old favorites like Charizard, Aerodactyl, Parasect, etc back into the game with new stat allotments, new or different abilities, and changes to typing.

Now like I said, the Megas may be too overpowered, like some legendaries. The good thing is Megas require a Mega Stone item. That means there is a trade off. You'll never face a Choice Scarf Mega Mewtwo for example. Additionally, if they are too OP, tournament organizers can ban the Mega Stones for that tournament. Also, Nintendo has already said you can only have one Mega in a battle at a time, so no double or triple battle Mega spamming.

Personally, at the moment, I don't see that many negatives to this new play mechanic. It's just a matter of how they are implemented. I look forward to seeing what other Pokémon get Mega evolutions.
Posted by FossilJockeyMG at 4:55 PM No comments: