An Interview with Zander B: GA Regional Senior Division Finalist


Today I will be recapping an interview with Zander Bennett. Zander is one of our newest writers, and even more importantly, a finalist from the 2013 GA TCG Regional Competition (Senior Division)! Zander is a member of the Johnson City Chapter of Team Knockout and he, along with many other Team KO members, traveled to Athens, Ga this past weekend to compete.


Matt G: How did you get into Pokemon and how long have you been playing?
Zander: I'm relatively new to the video games, I've been playing since 4th generation. When it comes to the TCG, I've only been playing the correct way since Dragons Exalted, August I believe. I've been collecting since about 2004, where my friends and I would stack up all of our "good cards", which were basically rares, holo rares, and ex's, and battle, without using any energies or trainers.

Matt G: What do you specialize in, TCG or VG, and what do you like most about it?
Zander: I specialize in the TCG instead of the VG because I just can't get myself to EV train. So much time and effort, but it is so worth it in the end. But in all honesty, I believe the TCG requires a lot of strategy, sure you don't have to get perfect stats, but everything can change super quickly in the TCG, and you have to be able to react to it extremely fast. For example, Scramble Switch from Plasma Storm is an extreme game changer, being able to bust out a new attacker so easily, and totally put your opponent in a state of "What am I supposed to do now?", and then try and be able to recover from it, it's crazy stuff, but lots of fun.
Matt G:What deck are you currently playing and why?
Zander: During the past regionals I played none other then Garbodor. Yes, I knew that Big Basics had won so much at States, and that it might possibly show up a lot in Seniors. I decided that it would be a risk worth taking as I had only played my Garbodor deck twice before the tournament, but Blastoise, RayEelz, Darkrai, and PlasmaKlang are so dependent on their abilities, 4 decks beats one. If Big Basics was dominating, I made sure to bring my own PlasmaKlang just in case. But since it wasn't, I thought Garbodor was a safe play.

Matt G.: What decks do you least like to face and why?
Zander: This is really difficult. Just kidding, easily it's Big Basics. Garbodor is Big Basics, just covering up some worse matchups. Everything else I mentioned Garbodor is good against. Against Big Basics, all of your Garbodor line and your tools become mostly worthless, only being useful to get rid of Bouffalant's Bouffer. As said above, I had only played the deck twice, so I didn't get to test against Big Basics, but I knew that it wouldn't be pretty. Shoutout to Darkrai/Lasers, that deck has kept me out of Top Cut so many times, I was scared to play it.
Matt G: What is your most recent tournament experience?
Zander: Spring Regionals in Athens, Georgia. Went to Top 4. This was a huge shocker, as I've said many times now, I've only played Garbodor twice before that day, and this was my fourth tournament. Ever.
Matt G.:If you have any advice for players considering to play in a premier tournament (Battle Roads, Cities, Regionals, etc) what advice would you give them?
Zander: As cliche as it sounds, go have fun. If you go just to get points, you obviously aren't having fun. If you go excited for your battles, and cheering on your opponents when they have good plays, and wishing them luck, trust me, you will have a great time. Strategically, I would say watch for your opponent playing supporters. If they choose to Skyla instead of an N which you saw them reveal  they are going to do a set up turn, and 99% of the time, play the N the next turn. So ,when it's your turn, give yourself a set up turn because they are going to N your hand away anyway. Lastly, if you are going to go just to get points and win, follow this 2 step plan: 1)Don't lose. 2)Win. It's that simple.
Posted by FossilJockeyMG at 3:20 PM No comments:

Team KO is rocking GA Regionals! You can follow my progress at labs.pokegym.net/stadium. Just click the Ga Regional link and enter 112700!
Posted by FossilJockeyMG at 10:18 AM No comments:

The Internet has been buzzing about this potentially new Mewtwo Forme. The picture was apparently leaked earlier in the week and is just now making it to major Pokemon sites like Serebii and Pokebeach.

Personally, it doesn't seem real to me. The main thing that bothers me is the tail that now is growing out of the back of Mewtwo's head. It also seems odd how we would be potentially be getting this new Forme in Pokemon X and Y. Normally, formes are reserved for games that come out later in a generation because Nintendo can't add new Pokemon within a single gen, but they can add formes. For example, Rotom and Giratina formes in Platinum and most recently the Kyurem Formes and Therian formes in Black 2/White 2.

Does that make it impossible that this Forme is real? No... but it would seem unlikely. Personally, if it is real, I'll keep my Mewtwo in its regular Forme. There is going to be an event Mewtwo released with the next movie, so if it does have something to with X and Y... either a new Forme or ingame event... I'm sure we'll know soon.

*UPDATE: This has been confirmed to be a new Mega evolution: MegaMewtwo. See Pokemon.com for details! 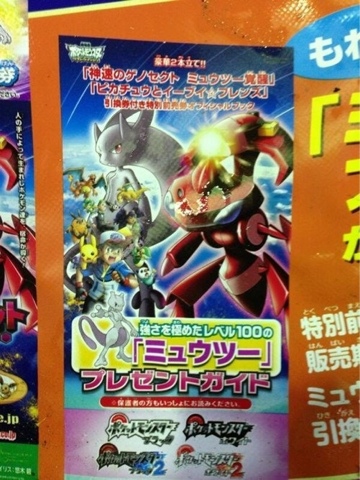 Posted by FossilJockeyMG at 5:26 PM No comments: