Sorry I haven't been posting a lot in light of new info coming out on Black 2 and White 2. Truthfully, I'm trying too
not be spoiled on to much info regarding the plot of the game. That being said, I have gathered some rather non-plot related info that someone who plays competitvely would like to know. I've also collected some info for collectors as well. Like I said in the title, these are minor spoilers. So if you don't want to know DO NOT continue reading...

Gym Leaders: Many of you already know this, but Lenora, Iris, as well as Cilan, Chili, and Cress are no longer Gym Leaders in B2W2. However, all of the other Gym Leaders return. They are below in order in which you will battle them:
Of the old Unova Gym Leaders returning, only Elesa has a redesign. Also, now some of the Gym Leaders may have pokémon from other regions on their teams.

World Championship: Even though some of the Gym Leaders have left thier positions in B2W2, that doesn't mean they are gone. There is a new battle facility in Unova, run by Cynthia, that allows the player to battle Gym Leaders and Champions from every generation for battle points. The image below shows all of the trainers in the new game, so if you don't want to know who all is appearing in the game, don't enlarge it.

Just so everyone knows, only Gym Leaders from Hoenn (Ruby/Sapphire/Emerald) seem to have new sprites. Leaders from Kanto or Johto use sprites from HGSS. This may mean that eventually we'll get Ruby/Sapphire remake or the fact they are in this game means that Game Freak may not see much of a need to make remakes again. Besides, technically there isn't much a need for Ru/Sa remakes. If you want the pokémon from those games, they are still compatible with the DS games. Just transfer pokémon from Ru/Sa to Diamond, Pearl, or Platinum and then to a BW or B2W2 game. The spites shown to the right were collected by Pokebeach members Magical, Zhorken, and Eevee.

Move Tutors Return: I doubt many people are surprised by the return of Move Tutors, but I for one am happy to see them come back. There are four tutors in Unova, and they work similar to the tutors in Platinum in that they need Shards to teach moves. Below are the moves for tutoring.
PokéDex Completion: Unlike in older games, completing your PokéDex will yield excellent rewards! Once you see every pokémon in Unova, Prof. Juniper will give you an item that speeds up egg production at the breeding center. After completing the National Dex, you'll get an item that increases the chance you'll run into a shiny... and you'll even get the chance to catch a shiny Haxorus!

Anyway, I'll make some more announcements later. Check back often! If you don't mind being spoiled on everything, and you want to know now, check out Serebii.net and Pokebeach.com. On a side note, the Global Link is back online with a new area! If you haven't checked it out yet I'd suggest you do!

Posted by FossilJockeyMG at 10:50 AM No comments:

For those of you who have Black and White, but did not get a chance to download Victini over Wifi... The event is now active again! If you want to download it, simply connect to the Nintendo WFC using Mystery Gift. This runs from June 12, 2012 to June 26th, 2012. 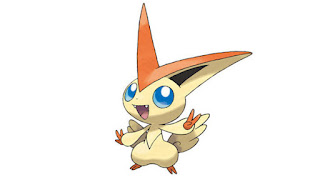 The Mystery Gift is to go along with the release of the Pokémon White: Victini and Reshiram/Pokémon Black: Victini and Zekrom in Europe. Since Mystery Gifts are set up regionally, this allows any English game to download it.

If you already downloaded one, you can't download another to that particular game.
Victini will be a Lv 50, and has Fusion Flare and Fusion Bolt.
Posted by FossilJockeyMG at 2:30 PM No comments: