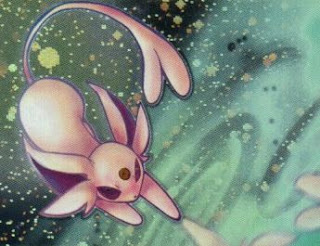 I find this little fox to be so cute…yes, I’m calling Espeon a fox, because its ears remind me of a fennec fox. It’s been in a tug of war with Vaporeon for years, as to which one is my favorite Eevolution…for right now, Espeon holds that title. One of my favorite Psychic-types, I really like using it as either an attacking force, or a supporter; and Espeon can do both rather well.

All Eeveelutions share base stat totals; only the values are rearranged. For Espeon, its 130 stat is Special Attack, and 110 is Speed…which means Espy can be used as a sweeper. It doesn’t have the largest special moveset, but its options are still rather viable. The next noteworthy stat is Special Defense at 95; other than that, HP, Defense, and Attack are all rather low. But still, that in no way reduces Espeon’s usability.

Before Generation V, Espeon’s ability was Synchronize…basically, reflects status back at the opponent. However, sleep and freeze are unaffected, and if the opponent is immune to the status, Synchronize doesn’t work and Espeon is stuck with status. It also doesn’t work with items that give status conditions. Although, Synchronize DOES have a use outside of battle; if the Pokemon with Synchronize is at the front of your party, the Pokemon you encounter in the wild have a 50% chance of having the same nature. Unfortunately, it doesn’t work with legendaries or other one-offs (Pokemon you obtain from people that you can only get once). It’s useful when chaining shinies, though. Instead of relying on pure luck for your nature you have a better shot of getting the nature you want.

Espeon’s new ability is its niche: Magic Bounce. Only available in the Dream World (or breeding a female DW Eeveelution), and Natu and Xatu are the only other Pokemon with access to MB. Basically, Magic Bounce is a superior version of Synchronize, since it reflects all status moves (without Espeon having to suffer), but it also reflects stat-lowering moves, Taunt, Roar, Whirlwind, and any entry hazards back at the opponent. Right away, being effectively immune to Taunt, Roar and Whirlwind means that Espeon is an amazing Baton Passer (Circle Throw and Dragon Tail still work, but Roar and Whirlwind are slightly more common, from what I've seen). Magic Bounce does have its limitations; but if it didn’t, the ability would be WAY overpowered. What DOES get Espeon are damaging attacks and Memento, the former of which is obvious, and the latter is something to remember if you are facing a Memento Dugtrio or something similar. Reshiram, Zekrom and anything with Mold Breaker are also unaffected by Magic Bounce. And, if you are thinking of using Espeon in double or triples; remember that Magic Bounce only works ONCE per round. So Espeon will reflect back whatever comes out first…then the team is vulnerable to everything after that.

Still…Espeon is cool. Here are its possible movesets:

Good old Baton Pass. Every Eeveelution can use it, but Espeon is one of the better ones. And with Magic Bounce, Roar is no longer an issue (unless something with Mold Breaker uses it). Regardless, the main idea is to set up some Calm Minds, maybe Reflect, then switch out to a special sweeper. Psychic and Psyshock are in case you wish to attack with Espeon. Shadow Ball and Fighting HP are alternate attacks that spread out coverage; Shadow Ball hits Ghosts and other Psychics, while Fighting HP hits Steels, Rocks, Darks and Normals. Downsides to each: Shadow Ball means you can’t hit Darks that well, and Fighting HP means you’re walled by Spiritomb and Sableye. Leftovers gives Espeon some healing while setting up, and Light Clay increases Reflect’s duration to seven turns…either one is viable.

With supporting Espeon being so popular, it’ll throw opponents for a loop if the Espeon starts attacking at full force. Magic Bounce has its counters, but it’s far better than Synchronize. Goal here is to be as fast and hit as hard as you can. Psychic is Espeon’s strongest attack, but Psyshock will let you hit special walls where it hurts. Grass Knot counters bulky Water types. Shadow Ball takes care of other Psychics and Ghosts. The last move is Espeon’s only other option: Hidden Power. The type just depends on what you want: Fire takes care of Ferrothorn, Forretress and Scizor; Fighting hits Tyranitar hard, and combos well with Shadow Ball; and Ice hits Gliscor and Dragons. Choice items give the better boost, but you need to switch to change attacks. Wise Glasses gives a 10% boost to Espeon’s attacks, and Life Orb gives 30% at a cost of 10% total HP; I’d go Wise Glasses, so you don’t automatically reveal that this Espeon is an offensively-oriented one. If you decide to go with Choice Scarf, go Modest…anything else, Timid.

A few additional notes:
-Espeon doesn’t have high HP, so I don’t like running Substitute. I’d use Vaporeon if I wanted an Eeveelution to use Substitute.
-Charm is a decent option for an attack. Makes Espeon more susceptible to the current opponent’s physical attacks.
-Since most Espeon run Magic Bounce, try playing mind games, and using a Zoroark. If they know you have a Zoroark, they then need to guess which one you’re actually using. If they mess up, it puts you ahead of the game.
-While Magic Bounce reflects status attacks back, there are some negative results. One such situation is a Pokemon with Flash Fire using Will-O-Wisp. Since Magic Bounce reflects WOW, the Pokemon with Flash Fire is hit with it, and gets a free boost to Fire attacks. Best candidates for this are Chandelure, Arcanine, Houndoom, Heatran, and DW Typhlosion (not yet available). Thunder Wave works in a similar manner against anything with Lightning Rod or Motor Drive. Poison isn’t as much as a concern, since Pokemon that benefit from being poisoned don’t usually carry Toxic. The only one you might encounter is Milotic, and being badly poisoned is still not a good thing for Milotic. So just be wary when using or battling a DW Espeon.
Posted by FossilJockeyMG at 4:54 PM No comments:

Today is the last day to really make any votes on who the most popular pokémon is that should be released via the Dream World next year. Right now Arceus is in the lead, however, Ditto has lost it's 2nd place spot to Mudkip as of today.

People! We CANNOT let the mudkip trolls get a come from behind win! If you haven't voted, do it now! You don't want the US to be the country who's "favorite pokémon" is Mudkip do you? Personally, I wouldn't care that much if it's Dream World ability wasn't lame compared to it's normal one. Damp is almost useless... I'd rather have an event legendary that's banned in tourney play.

Go vote now! From as many different computers as you can! I'd say Ditto should be America's fave, but as long as it isn't Mudkip, Magikarp, Rayquaza (because it has no DW ability), or Pikachu (gets too much love already)... I'd personally be happy...

Posted by FossilJockeyMG at 8:24 AM No comments:

Gearing Up For Victini

The latest Pokémon events to hit the states will feature Victini! Nintendo is obviously getting ready for the release of the latest Pokémon movie, set to be released in theaters on Dec. 3rd. In preparation there have been announcements of a Black and White Wifi event for Victini, a new Victini CGear Skin, as well as a Pokémon Rumble Victini being released.

The Wifi download Victini will be released starting on December 3rd and ending on Dec 31st. This Victini is most likely exactly the same as the one released in Japan. It will know V-Create as well as Zekrom and Reshiram's signature moves (Fusion Flare and Fusion Bolt). As with all events, it will be in a Cherish Ball and have a ribbon which will block it from being traded on the GTS. Be sure to mark your calendars!

The Victini CGear Skin is already avaliable for members of the Pokémon Global Link. Simply go to the promotions page and enter the code VICTINI2011. After entering the code the skin will be unlocked and the site will give you a walk thru on how to access it afterwards. If anyone has any issues with this, feel free to reply and I'll help walk you thru it.

The Pokémon Rumble Victini is already avaliable by entering the code 6699-8898. It has a strength of 440 (meh) and knows V-Create.

So anyway, loads of Victini stuff. In addition to downloads, apparently there will also be a new Pokémon Card Tin featuring Victini hitting shelves on Dec. 5th. The promo Victini within is a reprint from the newest set, Noble Victories. This card is actually very good in that it allows it's owner to re-flip for an attack if they so see fit. So, if you have pokémon like Klinglang which does damage based on flips, and you don't get enough heads, you get to retry one more time! Nice!


Posted by FossilJockeyMG at 4:04 PM No comments:

Justin S. has informed me that live on the Pokémon.com site is a poll for people to vote for a Kanto, Johto, Hoenn, or Sinnoh Pokémon of thier choice to appear on the Dream World! Japan has already had a poll like this, with the winner being Arceus. Everyone has from now to Nov. 30th to vote (the link is below)! It says you can only vote once, however I bet if you use several different computers (like at school) you can vote more. 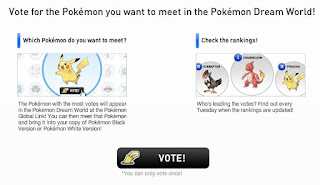 Here's my little take on this... most likely what's going to happen is the winner will be a Starter or Legendary. HOPEFULLY, people will either vote for a rare event legendary like Japan obviously did with Arceus or something with a Dream World ability. However, what I'm worried about is people voting for pokémon either already available via the Dream World, or those who don't have Dream World (DW) abilities. An example would be Rayquaza (which won the Korean poll). A DW Rayquaza is no different from an ingame Rayquaza... therefore pointless. You really want a Rayquaza? Play Emerald or HG/SS or hit the GTS. Here is a simple guide to help you with at least the pokémon which DON'T have a special Dream World ability, what DW abilities of the starters are, and what the abilities of the legends are (those not listed don't have DW abilities), and a couple other cool mentions.
Here are some starter and legendary pokémon with cool DW abilities:
Other pokémon which aren't yet avaliable in the Dream World but have cool abilities:
Anyway, thanks for reading.... Go vote (http://www.pokemon.com/us/vote/#/about)! If you want to reply with what you voted for and try to rally support feel free. Justin voted for Darkrai, because he wants an english one (he has a Japanese one) and I voted Charizard because I felt like taking it back old school. Plus, I really want to try out Charizard with the DW ability... I don't really care for Blaze.
Posted by FossilJockeyMG at 10:05 PM No comments: