Victini and The Dark Hero

The next pokémon movie for Japan has been announced, Victini and the Dark (or Black depending on the translation you follow) Hero! Many sites have begun speculation on who the Dark Hero could be. Some guesses that have come up include Zekrom, Kerudio, or even N.

I'm going to go out on a crackpot idea.... The Dark (Black) Hero is Genosect.

Why? Well here's my reasoning:

Anyway, yea... I think Genosect (who has yet to receive official art.. the pic above was drawn by Xous54 as was the Kerudio image). What do you think?

*Update: A new trailer shows both Victini and Zekrom, however it's unclear if Zekrom has a major role in the movie or if it is the Dark Hero. The trailer shows Zekrom basically raging using electric attacks and Victini launching a fire attack, but in different scenes (Zekrom in a mountain setting and Victini over water). Since they aren't interacting with each other it's hard to tell. Also it's common for scenes in early trailers to be solely promotional and never actually appearing in the movie. For example, an early Trailer for Giratina and the Sky Warrior had Regigigas bursting out of the ground in the middle of a Gracidea flower field but in the movie it awoke in a snowy temple and never actually interacted with the flower field.

The Science of Pokémon: How Far Off Is It?

I stumbled across this article on GeekMom today discussing the difference between Pokémon evolution and the actual Theory of Evolution as set forth by Charles Darwin. I think the article is interesting, and it's nice to see an article by a parent who isn't saying Pokémon is evil due evolution being a part of it. However, as you can see by my personal reply, it got me thinking about the science in pokémon. Is it real science or just entertainment, or something in between? 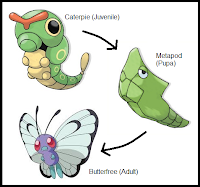 The first concept I'm going to discuss is evolution as that is the point of the GeekMom article. Pokémon evolution can be brought about by several means, as we all already know. You can evolve a pokémon in the video games by level, using an item like an evolution stone, or trading. Pokémon uses the term of evolution very loosely. Rather than being like the scientific definition of evolution, it's more used as a term for progression (like the evolution of an idea) or metamorphosis. For example everyone knows about insect metamorphosis. A catepillar (larva) as it gets older creates a cacoon (pupa) and then emerges as a butterfly (adult). Many pokémon follow this trend, for example Caterpie (larva) "evolves" into Metapod (pupa) once it reaches a certain level and then into Butterfree (adult) at an even higher level. In this instance, maturity in real animals and level in pokémon are somewhat equal to the same thing. Once the organism reaches a certain maturity, it metamorphs into its next stage. Many animals, however, don't undergo metamorphosis and the same goes for pokémon. For example, you can hatch a Lapras from an egg and no matter what you do or how high of a level it is, it will never metamorph into something else. Other evolution methods, such as using items are trading, are less realistic but are meant solely to add diversity to the evolution methods. However, they do mimic the outward appearence changes brought on by radiation. It is possible that items, such as evolution stones, produce a type of radiation which causes mutation and thereby changing the pokémon's appearance and the same goes for trading through electronic means. Now, mutation is a driving force of Darwin's evolution theory, however pokémon greatly simplifies it. 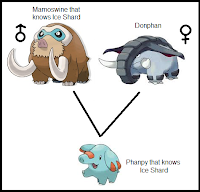 Another topic pokémon explores is the concept of heredity. In the pokémon games, trainers can breed thier pokémon. Rather than mixing the genes of the two parents, however, pokémon uses attacks to simulate heredity. For example, the elephant pokémon Donphan cannot learn the move Ice Shard naturally but the mammoth pig pokémon Mamoswine can. If the trainer has a female Donphan and a male Mamoswine with Ice Shard, they can breed these two pokémon together. The baby will always be the most juvenile form of the female (in this case Donphan's lowest form is Phanpy) and it will inherit certain attacks from the father (in this case Ice Shard). Other things can be transferred as well, however attacks are the easiest things for a pokémon to inherit.

As far as the science in Pokémon, it is pretty simplified, but as a game that was simply meant to be entertainment it does a decent job. The main problem is the slight misuse of terms, however I believe this to be a matter of preference on part of the programmers. Evolution is a very snazzy buzz word sometimes, whereas metamorphosis isn't. Pokémon isn't the first game to use evolution incorrectly, many games which involve one creature changing to another have used it (for example Digimon "digivolve", an obvious play on evolve). However, it can be used for an introduction to science, if not at least to spark conversation about the use of terms. Additionally, it introduces children to ecology (certain pokémon only appear in certain habitats) and the concept of scientific field work in the form of collecting specimens (capturing pokémon) for study. So, is the science in pokémon decent, just entertainment, or something in between? I think it's best descibed as somewhere in between. In fact, I'm surprised that the game covers as much introductory science as it does. The topics I discussed here are tip of the iceberg. There is also sexual dimorphism (male and female differences), predator/prey relationships, and allopatric speciation (which is when two very similar species which have evolved slight differences brought on by being seperated geographically). The list goes on!
Posted by FossilJockeyMG at 12:40 PM No comments: 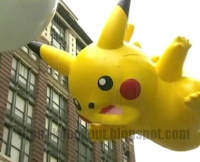 Not really huge news, but I just saw the Pikachu balloon in the Macy's Thanksgiving Day Parade. Some of you may have heard that Pikachu would be accompanied by Reshiram and Zekrom ballons, which would make it the first year that other pokémon besides Pikachu would be in the parade.
Well, they were there in all thier glory. They weren't balloons though, they were more like mini-floats. Either way, very cool. I wonder if other pokémon will start appearing in the parade with Pikachu? 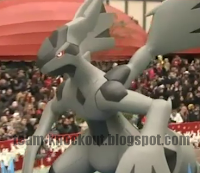 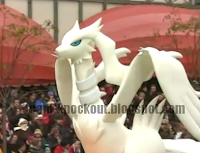 What pokémon would you like to see on a float or as a big balloon?
Posted by FossilJockeyMG at 12:11 PM No comments:

A Call for Writers!

As we get ever closer to the release to Black and White this spring, I would like to attempt to assemble a team of writers to basically report on thier respective journey through Unova, what they liked/disliked, possibly even strategies. To do this I'm putting a call out to you, the readers.

Of course, as a writer for TKO you can also write flavor stories, like the story I wrote here for example. There are only a few guidelines that I have for writers on this blog:

2) It's ok to be critical of something, but don't go overboard. "This pokémon is horrible and should never see the light of day" is overboard. Simply saying it isn't commonly used, or is generally considered rather weak is a better way to say it.

3) As editor I may edit your grammar or spellcheck your writing. If your article is offensive I will delete it.. and you.. from Team KO.

Do you want to become part of Team Knockout as a staff writer? If so, email me a short article you would like to see posted on TKO at pkmnbattlefront@yahoo.com (before Feb 1st please). If it's good, I will add you as a writer and you can post it yourself! There are currently five, four three positions open.
Posted by FossilJockeyMG at 3:39 AM No comments:

After weeks of nothing of note to report I finally have something! The english names of the Black and White starters have been released! They are..

The region also got a name change from Isshu to Unova.

Of course, the pokémon community is an uproar.. which it almost constantly is when anything new is announced. Many people have a distaste for the new english names ( I generally don't care as I evolve/nickname my pokémon). The region name is also taking some flack, with some people complaining about such useless things like, "it's not two syllables like the other regions, therefore I hate it." I, again, don't really have a strong opinion about this.. but I do like the region isn't going to be called Isshu. I was willing to suck it up, but I didn't really like how it sounded too much like "Issue."

Rant if you must! For more info check out pokemonblackwhite.com.
Posted by FossilJockeyMG at 12:26 AM No comments: