This weekend several members of Team Knockout will be attending DragonCon. For those of you who don't know what Dragon*Con is, here's a little blurb from the website...
"Dragon*Con is the largest multi-media, popular culture convention focusing on science fiction and fantasy, gaming, comics, literature, art, music, and film in the universe!
This year, Dragon*Con will be held Labor Day weekend (September 3–6, 2010) in Atlanta, GA."
We are entering the Cosplay Contest as pokémon characters (of course): Lauren is going as May, I'm going as Byron, Aaron is going as Lt. Surge, and Earl is going as a Petrel (or potentially just a Rocket Grunt). I'll post pictures of us in our costumes after Dragon*Con.

Team Knockout League members (only those in the Johnson City, TN Chapter), since we will be gone the entire weekend we won't be at League. Don't worry though, League isn't cancelled. Tim isn't going with us to Dragon*Con so he's in charge!

Also, readers! Make comments or email me with things you want to see! I like you guys are voting in the poll, but there is other stuff to do too!
Posted by FossilJockeyMG at 10:22 AM No comments:

New Pokémon and a New Series

Several new pokémon have released recently, as you can see to the left. Some I have already mentioned, like "Wargle" the eagle like pokémon seen in the center of the picture.

Moving from left to right, we have Shikijika (the small deer). It's a normal/grass type that has different color schemes depending on which season you catch it. It can have a new ability, Herbivore, which boosts it's Attack when hit with a grass move. It seems to be an interesting pokémon, and it's nice to see a new unique type combo.

Next there is Swana, the swan pokémon. It seems pretty standard, as it represents the 5th gen Water/Flying type. Each gen has had one. Red/Blue/Yellow had Gyarados, Gold/Silver/Crystal had Mantine, Ruby/Sapphire/Emerald had Wingull and Pelipper, and Diamond/Pearl/Platinum had Mantyke. At the moment, it is one of the ones I care the least for.

Above Swana is Mamanbou which looks like it may be an evolution of Luvdisc. Gamefreak has already said that we won't be able to catch older gen pokémon until we beat the game, so it's possible Mamanbou won't be obtainable until after beating the Elite Four. The design is a little wierd, but it does look more like a fish than Luvdisc.

The mole pokémon, Moguryu, is an interesting new ground type that has two new abilities. One ability boosts the power of Moguryu's Steel, Rock, and Ground moves the other speeds it up in Sandstorms. We also know it has an evolution, which we don't have a good picture for. I can tell you this much, it looks like it's arms and head come together to look like a big drill.

The new bug pokémon is Kurumiru, and is grass/bug type obviously. Not much stands out about this guy yet but it'll probably be this generation's Weedle/Caterpire/Wurple/Kricketot. It can either have the Swarm or Chlorophyll as it's ability.

Gigaiasu it the large rock pokémon covered in crystals. It's really stoaked about this guy, since it looks so cool. It has the Study ability, which will be getting an upgrade in Black and White. In the current games, Study will only protect you from attacks like Fissure which always one hit ko. In Black and White, Study will protect the pokémon from being one hit ko period. For example, if your rock pokémon gets hit by a powerful water move it would probably get ko'd automatically... but if your pokémon has Sturdy it will survive with one HP like a built in Focus Sash.


The final pokémon, Yanappu, is a grass monkey which will actually be a pokémon owned by one of the new cast members of the newest pokémon series, Pokémon Best Wishes! 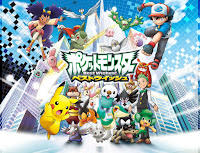 On the right is a press release picture relating to Pokémon Best Wishes. The trainer in the lower right (the guy with the green hair) is Dento. He will be Yanappu and has been confirmed that he is the first Gym Leader in Black and White. In the series, he leaves his Gym to travel with Ash and Iris (the purple haired girl). Obviously, Brock and Dawn will be leaving the series. Also, Ash got a redesign. Below is a video from YouTube showing new footage from Best Wishes. It looks to be a great series and I look forward to it. The only thing is I'm going to have to get use to Ash not having skinny little cat eyes! LOL! If you click the Best Wishes poster, you can watch a trailer of the series on YouTube.
Posted by FossilJockeyMG at 8:29 PM No comments: