Nintendo has released 3 new pokémon from Black and White: and evolution of Minezumi (the chipmunk looking pokémon), a fawn that is potentially a baby version of Stantler, and a Swan. The full story can be read here on PokéBeach. Included with the article are the original video footage that was aired on the Japanese TV show Oha Suta which show a good deal of the game play, such as the possible addition of areas changing depending on the season.

In Pokémon Organized Play news, the Battle Frontier season is almost over with this season being the last. This season is based around Hall Matron Argenta and is set to last most of August. The Argenta season prizes include special POP holographic versions of Butterfree SP (which is actually owned by Argenta) and Warp Point with each participant able to earn up to four copies of each. Two for maxing out points playing the Card Game, two for maxing out points playing the Video Game.

Members of the Team Knockout League of Johnson City, however, can choose to receive specially bred pokémon instead of cards when they max out points for the Video Game as we recognize that some people who play the video game only play the video game, so pokémon with really strong egg moves could be more useful.

Since the Battle Frontier season is coming to a close, Nintendo will be starting the new 2010 -2011 season in September and it will be based on the events from the Pokéathlon from HeartGold and SoulSilver. The first event season will be the Ring Drop.

In Game Download News, today marks the first day that HeartGold and SoulSilver players in the US, Europe, and Austrailia can download the Enigma Stone via Nintendo Wifi. Simply connect to any availible wifi hotspot to download. The Enigma Stone holds a special secret if you take it to the Museum in Pewter City.
Posted by FossilJockeyMG at 10:37 AM No comments:

A lot of good things, some bad 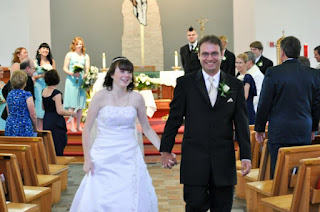 n June 26th, I married my fiancé Lauren! It was a beautiful ceremony and the main reason why I haven't really posted on any of the new Black and White news that has broken as of late on Serebii.net and PokéBeach. I figure all you guys who really wanted to know that information probably already know it, but if you want to know my opinion on some of the recent developments here they are, if you want to see the pokémon I'm referring to... check this story on Pokébeach by clicking here:

Well, that's the good. Another reason I've been slow to update is I seem to have an infection in my abdomen. I've been sick since my honeymoon in Orlando, which I just returned from this past Sunday. Today is the first day I've been well all day long. I am currently taking antibiotics and I plan on being more timely once I'm 100%.
Posted by FossilJockeyMG at 9:26 PM No comments: