How to start a chain

Here's a little into video on how to chain. Consider it a prequel to my last video on chaining shiny pokémon.

Posted by FossilJockeyMG at 1:16 AM No comments: 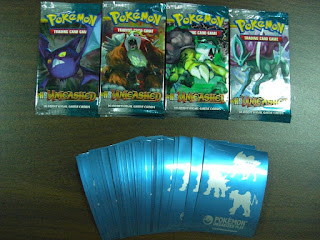 Sorry for the over one week hiatus, I was in the midst of finals as well as competing in a couple recent tournaments. As you all probably know, HS: Unleashed was just released stateside.. and I along with my fellow Team KO members Aaron and Tim got to participate in the prerelease the weekend before last.

For anyone who hasn't been to a prerelease the rules are simple. You pay an entry fee ($25) you get 1 promo card, a pack of special pokémon sleeves, and 6 packs. From the six packs, you build a deck of 40 cards. All basic energy are supplied. This is a great way for anyone new to the game to learn the rules and be on the same playing field as everyone else. Also, once the tournament is over each player gets 2 more packs for a total of eight.

My packs yielded ok stuff, with the rarest things being a Tyranitar (PRIME) and Lanturn (PRIME), but unfortunately I didn't get enough of thier lower forms to play them. Despite that set back I went 3W/2L which isn't bad for not having anything particularly strong in my deck. My fellow team members did well too. Tim went 4W/1L and Aaron when 2W/3L .. but only because one of the rounds we had to play each other... in which case one of us had to lose.

This past weekend we had a small video game tournament with some of the Team KO members in Stateboro, Georgia and visited the League there. This tournament was the second in a series we refer to as "Arceus Type Challenges." Basically, each person draws a type from a hat and makes a team based on that type. I had Steel, Lauren had Bug, Earl had Grass, Aaron had Rock, Cody had Ground, Tim had Dark, etc. Dual types are allowed, but one of thier types has to match the type they drew. The battles were intense, and some video footage was taken which may be posted in the future. I want to congraduate Cody for getting 1st, Earl for getting 2nd, and Aaron for getting 3rd!

Posted by FossilJockeyMG at 1:16 AM No comments: