Readers! Halloween is only days away. If you have any pictures of Pokemon costumes or of Pokemon Jack O' Lanterns, or whatever, post them on the message board! Here's a Gengar one I made! 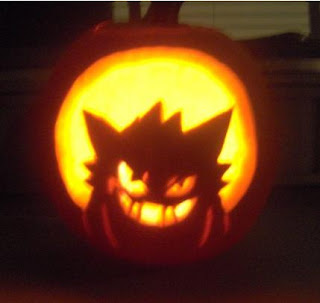 And here's Sableye Aaron made! 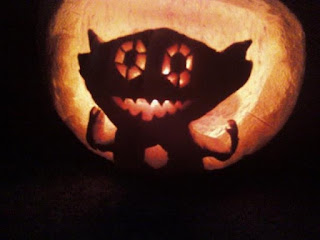 To see some other great pokemon Jack O' Lanturns (lol) check out this thread on Pokegym.net! If you have cool pokemon pumpkins, post them on the message board.

Posted by FossilJockeyMG at 12:30 PM No comments:

My Trip to New York

So I just returned from New York this past Wednesday. I went to do work in the fossil collections at the American Museum of Natural History, but I got to do a great deal of sightseeing as well.

Of note, I got to visit Nintendo World and purchase several pokemon items. Nintendo is apparently pretty big in New York. The picture on the left was taken at the

extremely large Toys 'R Us. As you can see, the display they have for the Nintendo section is pretty extreme.

Of course while I was there I went to other tourist areas like Chinatown, the Empire State Bulding, etc.

Speaking of Chinatown, if you ever find yourself in New York and if your interested in imported games there is a great store for imported games at the mall. The store itself is called J and L Games I believe. I know it starts with J. Anyway, they have a ton of games and a great deal of rare imported games. I bought a copy Heartgold while I was there and I've been playing since I've gotten back. I've enjoyed it so far. I've been moving slowly because I'm been experimenting a great deal with the PokeWalker. I downloaded the Yellow Forest course through Mystery Gift and I'm attempting to catch some of the rare Pikachu. Apparently the Yellow Forest is a course which contains ONLY Pikachu, and some actually can be caught knowing Surf, Fly, and Volt Tackle. So far I haven't gotten one myself, but I'm hoping to catch a good deal so that I can use some for trading. Gamewise, I've just beaten Bugsy and I'm heading into Ilex Forest. Just a heads up for anyone getting the english versions of the spring, Faulkner is a pain to beat unless you bring a good strong Rock or Electric type to take his pokemon out quickly. I don't want to give to much away spoiler-wise... but I will say this, one has a healing move.

I'm going to keep trucking away on Heartgold and if anything crazy pops up I'll talk about it. I really enjoy the mechanic of the first pokemon in your party following you. I sent over my lv. 20 Regigigas to level it up quickly and it's really cool having Regigigas following me around.
Posted by FossilJockeyMG at 4:11 PM No comments:

Sorry for the bit of hiatus there guys, there wasn't a whole lot going on in the DS tourny scene as spring/summer is usually when that kind of stuff goes on. Also, I have been really busy on some of my course work at college so I haven't a whole lot of time to just play the DS game and raise some pokemon. HOWEVER, I'm getting caught up so I will have a little time to play so I'm going to start posting pokemon of the week again. More than likely it's going to be on Saturdays, I don't really do much on Saturdays.

The only exception is next week, I'm going to New York City! Some of my research is making it pretty much a necessity for me to go to there so I'm going to stop by the Nintendo World store while I am there. 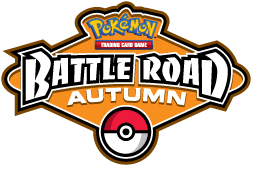 What some of you may or may not know, I also play the pokemon card game tourny scene as well. I'm not as good in cards as I am in the DS games, but I can put up a pretty good fight. This past weekend there was a Battle Roads tournament held in my old stomping grounds at Galactic Comics and Games. There are two locations for Galactic, one in my hometown of Statesboro, GA and one a small drive away in Pooler, GA. When I play the card game I am actually playing as one of the members of Team Galactic (which is the name of the League at the Galactic store) because I'm still a league leader. I travelled down with two other members of Team Knockout, Lauren and Aaron. If you have been following the blog, Lauren is a veteran member (and my fiance) so she almost always goes with me to pokemon events. Aaron is a new member of our team. Only Aaron and I were actually in the tournament. Lauren is DS exclusive.
The first day was held in Pooler, and the second was in Statesboro. Unfortunately, we had it backwards and showed up to the Statesboro Galactic only to have to book it to Pooler real quick. Despite that Aaron and I made it in time. As for our decks, I was playing what is referred to as a MightyTank deck and Aaron was playing a Rogue (or original) Glaceon deck. Although my deck was also something I made without the help of the internet, apparently someone had already thought of the idea so I can't claim it.

The concept behind Aaron's deck was pretty straight forward. Bascially he was running a combo between Glaceon and Espeon. The Glaceon (seen to the right) is really good in that for one energy it can do 30 damage PLUS have a change of being immune from attacks the following turn. The Espeon is from the same card set (Majestic Dawn) and it's Poke-Body increases the HP of all pokemon that evolve from Eevee by 20 HP. Along with these he had back up pokemon like Toxicroak to basically poison the opponents pokemon, then the following turn bring in Glaceon to potentially stall the pokemon out until poison did it in. This deck wasn't originally the one wanted to use, instead he had build a Yanmega deck which could spread damage around to all of the opponents pokemon in play, but he forgot that deck in Tennessee so he had to play with what he had. The deck didn't do that great compared to the multitude of level X pokemon that came up against him so he's basically decided to either totally revamp it or scrap it and do something different for the Citiy Championships being held this winter.

My deck had a little bit better showing, but granted I was actually using a deck I had built for tounament play. I'm sure if Aaron had been able to play the deck he wanted to he would have done well. My deck was based around the Mightyena seen to the left. It's Cold Feet Poke-Body allows it to basically attack without energies if it is suffering from a Special Condition like Poison. Since this would really only be good against Special Condition decks normally, it's pretty iffy. To fix this, I included Skuntank G which allows me to poison both my active pokemon and the opponents pokemon (so long as they aren't an SP pokemon) if I have a Stadium Card in play. With this Skuntank G, I am able to poison the Mightyena myself and use it's Desperate Attack no matter now many energies I have attached to it (I usually have none) and if I have less energies than my opponent I can hit them for 80 damage for free! At the Pooler tournament I won second place, and several packs. The Statesboro tournament didn't go as well. I went through the entire tournament not able to get a single Mightyena from my deck. After the tourny I played a round with one of my opponents and got 2 Mightyena out no problems. That's just how it goes sometimes.

All an all the trip was a great learning experience. Battle Roads tournaments are very lowly ranked, are more about practice than anything else and both I and Aaron got some good insight into what we need to do for future higher ranked tournaments like City, State, and/or Regionals.
The next tournament I plan to attend is the prerelease for the next set Platinum: Arceus. More details on that later!
Posted by FossilJockeyMG at 6:18 PM No comments: